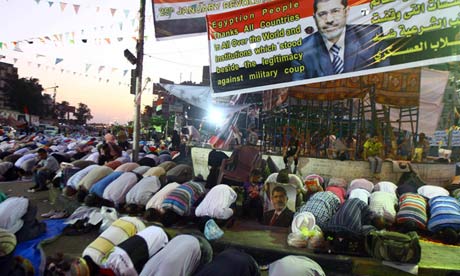 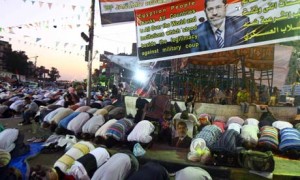 Unrest in Egypt continues to dominate many world medias as the Muslim brotherhood party, which is against the arrest of their leaders and ousted democratically elected president Mohammed Morsi, says through its official websites that it will continue to hold ‘peaceful’ protest until Morsi is reinstated to power and key members let off the hook.
Thousands of Morsi supporters are protesting while fasting this Friday during the holy month of Ramadan at the building where Morsi is held for days now. A statement issued on the brotherhood’s website said “We [the brotherhood party] will continue our peaceful resistance to the bloody military coup against constitutional legitimacy, we trust that the peaceful and popular will of the people shall triumph over force and oppression.”
The army officials said in a statement that Morsi is in a ‘safe place’ and he is been treated in a dignified manner, but in recent developments they arrested some other key figures of the brotherhood including its supreme leader Mohammed Badie, for provoking violence in connection with Monday’s leading to the death of more than 50 people.
The interim president has issued a timetable scheduling parliamentary elections within six months. However the Muslim brotherhood refuses to tolerate or cooperate with the interim leaders, saying in that they don’t deal with the military, thereby rejecting all that comes from them.
The international committee commented on the matter as UN secretary general Ban Ki-moon warned that no party should be excluded from the political proceedings, and the US called on the new leaders to stop carrying out arbitrary arrests of brotherhood members.

North Africa Post's news desk is composed of journalists and editors, who are constantly working to provide new and accurate stories to NAP readers.
NEWER POSTThe Shift to a Multi-polar Global Economy: Are We Prepared to Handle It?
OLDER POSTLibya foresees strong Sukuk