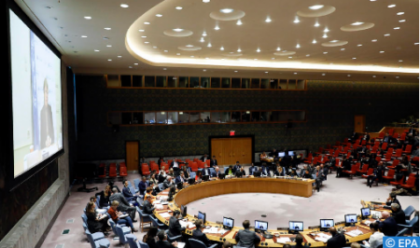 The UN Security Council has reiterated the parameters it had set out in its resolutions 2414, 2440, 2468, and 2494 to achieve a final solution to the regional dispute over the Moroccan Sahara.

The Security Council members made it clear at a briefing on the Moroccan Sahara issue, held Thursday, that there is no other alternative to achieve a political solution to the Sahara than the roundtable process, which brought together Morocco, Algeria, Mauritania, and the Polisario, in Geneva in December 2018 and March 2019 Morocco, MAP news agency quoted diplomatic sources in the UN as saying.

This political solution can only be realistic, pragmatic, lasting, and based on compromise, which are the parameters already set out in the last resolutions and which unequivocally refer to the Moroccan autonomy initiative, deemed as serious and credible by the Security Council since 2007.

According to the diplomatic sources, contrary to the wishes of Algeria, which mobilized its lobbyists and its official and unofficial press, the Security Council has ignored its uproar over the opening of Consulates in the Saharan cities of Laayoune and Dakhla. The Security Council considers that these are acts of sovereignty in accordance with international law and fall strictly within the framework of bilateral relations between Morocco and its African partners.
The UN executive body has thus deflated Algeria’s shaky arguments, the sources said.

Besides, Algeria’s tumult over the opening of African countries’ Consulates proves once again that Algeria is the main party to the regional dispute over the Moroccan Sahara, and that the Polisario is a mere puppet.

The Thursday briefing was held in accordance with resolution 2494, adopted on October 30, 2019,