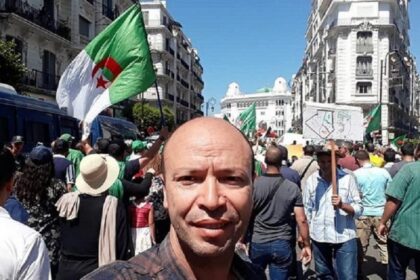 The Covid-19 pandemic, which affected so far 1,423 and killed 173 people in Algeria, does not prevent the Algerian justice system from punishing “Hirak” activists and journalists.

On Monday, Abdelouahab Fersaoui, president of the Rassemblement-Actions-Jeunesse (RAJ), an association at the forefront of the anti-regime popular movement, known as “Hirak”, was handed a one year in prison Monday for “harming the integrity of the national territory”.

The 39-year-old academic had been arrested on October 10 while participating in a sit-in in support of political prisoners.

Human rights associations argue that he had been arrested for expressing his opinion and criticizing the repression against the “Hirak” militants.

“The government is taking advantage of the global pandemic to intensify the repression, behind closed doors, as it usually does,” Hakim Addad, founding member of the RAJ, told AFP. Hakim Addad, who had himself been detained for more than three months for participating in the protests against the regime, said they will appeal the verdict.

He said Mr. Fersaoui’s conviction was pronounced by magistrates “who are in the service of a dictatorial, police and military power”.

The Algerian judicial machine is also targeting journalists. These include freelance journalist and correspondent for Reporters Without Borders (RSF) Khaled Drareni, who had been arrested on March 29 after reporting on a demonstration in Algiers, according to AFP.

Two other journalists are behind bars, Sofiane Merakchi and Belkacim Djir, states the French news agency, which also mentions activist Karim Tabbou, an emblematic figure of the protest movement, already sentenced to one year in prison. He will appear on April 27 in another trial, accused this time of “damage to the morale of the army,” said his lawyer on Monday.

But there are also lesser-known prisoners of conscience.

According to the latest tally of the National Committee for the release of detainees (CNLD), 44 people are currently in detention for facts related to the “Hirak”.

These convictions and arbitrary detentions were vehemently condemned by Algerian and international human rights watchdogs.

“Judicial harassment continues against activists and detainees during this period of confinement of citizens,” commented the National Committee for the Liberation of Detainees (CNLD), on its Facebook page.

“To condemn an activist to a year in prison for having expressed his opinion peacefully on Facebook during a health crisis is unacceptable and scandalous,” Amnesty International reacted in a statement.

“We are stunned. We were awaiting his release, or at least a six-month sentence, a sentence he has already served,” Said Salhi, vice-president of the Algerian League for the Defense of human rights (LADDH).

“This conviction confirms our concern about the risk of escalating repression,” he observed.

If President Abdelmadjid Tebboune pardoned more than 5,000 prisoners last week, this leniency measure did not benefit any of the “Hirak” detainees awaiting trial.

However, the coming trials will “maintain the + Hirak +” and will not lead to “either demobilization or appeasement”, assures Mr. Salhi, of the LADDH. Quite the contrary.

Meanwhile, despite the pandemic of the new coronavirus, the judicial machine continues to crack down on militants, human rights advocates.