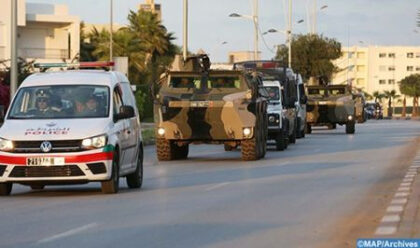 The magazine “Forbes France” highlighted, on Monday, the “Marshall Plan” deployed by King Mohammed VI, from the start of the coronavirus health crisis, as part of an anticipatory approach meant to support the economy and protect the populations.

The magazine detailed this response plan and the various far-reaching measures implemented by Morocco to combat the spread of the coronavirus and to offset the economic and social impact of the epidemic.

“Since the announcement of the first confirmed case of covid-19 on its soil, Morocco has deployed a major response plan to combat the spread of the virus and to address the economic and social impact of the world health crisis in several sectors mainly tourism or catering,” underlines the magazine which publishes an analysis by economist Najib Benamour, who is the Executive secretary general of the Moroccan Institute of strategic intelligence.

Morocco, which decreed a state of health emergency, locked its borders and instituted general confinement since March 20, “is mobilizing massively” to support the populations most affected by the slowdown in economic activity, particularly through the special fund for the management of the COVID-19 pandemic.

The fund, set up at the initiative of King Mohammed VI, has raised over 32 billion dirhams in donations to date ($3.2 billion), indicates the author of this analysis.

He also recalls the establishment of the economic monitoring committee, to “assess and anticipate the direct and indirect economic repercussions of Covid-19”, which adopted a series of anticipatory financial measures targeting the whole population.

The committee first targeted the MSMEs and employees affiliated to the National Pension Fund, CNSS, notably through the suspension of the payment of social charges and the disbursement of specific allowances. The committee then tackled the case of informal sector employees, who represent a “significant part” of the population and occupy a “considerable” place in the Moroccan economic landscape.

The author of the analysis explained how the Moroccan Government tackled the difficulty to identify the informal sector workers, targeting first the households, which hold a RAMED health card, a medical assistance scheme implemented by Morocco for the benefit of the poor. In a second phase, compensations will be distributed to families operating in the informal sector but not affiliated to RAMED who have lost their income due to confinement.

Forbes also highlights that Fitch Rating agency has maintained unchanged the Kingdom’s rating, in a report published on March 16, where it analyzes the risks of Covid-19 on the Moroccan economy.

According to the agency, the kingdom has buffers capable of managing the pressures due to the coronavirus, despite the drought notably thanks to the recent decision to adjust the flexibility of the exchange rate regime.

“Taken together, these measures constitute a veritable” Marshall Plan “deployed by the King of Morocco, who from the start of the crisis applied the principle of maximum precaution in order to preserve the Kingdom from the pandemic,” states the magazine.