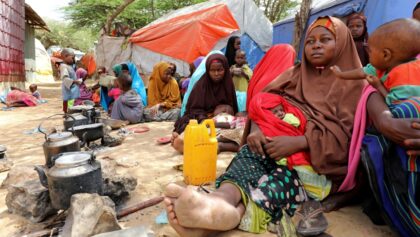 Amnesty says an 18-year-old woman and a 53-year-old banana farmer were killed in two separate drone strikes, one in the town of Jilib, the other in Kumbareere village. Three others were injured.

The US acknowledged the attacks but said they killed “terrorists” from the Islamist militant group al-Shabab.

Amnesty analyzed satellite images and video evidence, and interviewed family members and the victims’ communities, who insisted the dead were not members of the militant group.

Amnesty says US air strikes have in total killed more than 20 Somali civilians since it started its air campaign in Somalia more than a decade ago.

The US carried out its first drone attack in Somalia in 2011. Since Trump took office in January 2017, at least 145 drones or air raids have hit Somalia, according to figures from the Bureau of Investigative Journalism and the US army.

In just five of those attacks, at least 14 civilians were killed and eight more injured, according to Amnesty International.

The armed Al-Shabab group, an al-Qaeda-linked group fighting to overthrow Somalia’s internationally recognized government, was pushed out of the capital, Mogadishu, by Somali forces backed by African Union troops in 2011.

Al-Shabab has also lost control of other major towns and cities but continues to carry out attacks in Somalia and the region. In January, the group attacked a military base in neighboring Kenya, killing three Americans – a soldier and two contractors.

On Tuesday, the US military announced it would from next month publish reports on allegations of civilian casualties in its Africa operations.