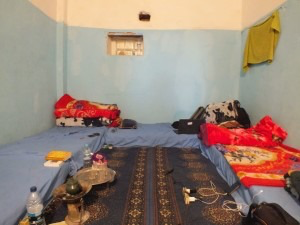 The over one hundred Sahrawis who have been stranded at the borders between Algeria and Mauritania after they were denied return to Tindouf, out of fear of the spread of coronavirus, spent days in the desert area without water or food and were totally ignored by the Polisario and their mentor, Algeria.

Some of them, however, managed to make their way to the Tindouf camps, thinking that their ordeal in the desert was over, but instead, they were thrown in confinement rooms that lack the most basic conditions of hygiene, not to speak of comfort.

The other inhabitants of the camps, forced into compulsory confinement for a long time, are in no better situation, as the rulers of Algeria, the host country, are much more concerned by the collapse of oil prices than by the deteriorating situation in the Tindouf camps. The only measure taken by Algerian authorities with regard to the Tindouf camps was to impose a strict monitoring of passengers at crossing points in Tindouf.

Meanwhile, the Polisario leaders seem more preoccupied by their own safety than by the safety of the camps inhabitants and confined themselves in luxury villas.

In this connection, the Moroccan Organization for Human Rights (OMDH) has recently called on the UN Secretary General and the UN High Commissioner for Refugees “to urgently intervene” to protect the sequestered populations in the Tindouf camps against the coronavirus pandemic.

In a letter sent to the UN Chief and UNHCR, the Moroccan Human rights watchdog voiced deep concern over the situation of the inhabitants of the Tindouf camps and urged the two top UN officials to provide these Sahrawis with “the necessary medical care”.

The human rights organization also called for the immediate international protection of these Sahrawis who have been left by the polisario leadership to fend for themselves in very difficult conditions.

European Union sources in Brussels have also expressed the Union’s serious concern over the danger of a coronavirus outbreak in the Tindouf camps, a “no-right zone”.

An outbreak of the COVID-19 in these camps would actually be tragic in view of lack of adequate medical equipment and devices, and total lack of hygiene because of the chronic scarcity of drinking water and sanitation system that does not meet the standards.