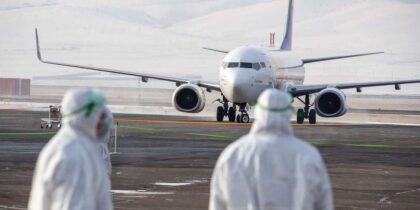 Moroccan authorities have decided to suspend until further notice passenger flights with 21 more countries in Europe, Africa, the Middle East, and the Americas.

The announcement was made by the Ministry of Foreign Affairs in a press release issued Saturday, March 14, the same day the Ministry of Health announced nine new cases of the novel coronavirus (COVID-19), bringing to 17 the total number of confirmed cases in the Kingdom.

The new flights suspension announcement came just hours after the country announced the suspension of flights to and from the Netherlands, Belgium, Germany, and Portugal.

The newly-announced suspensions concern flights to and from Austria, Denmark, Greece, Switzerland, Sweden, Norway and Turkey, as well as Lebanon, Egypt, Bahrain, the United Arab Emirates, Oman, Jordan and Tunisia.

Nevertheless, Moroccan authorities have acceded to the request of several countries affected by the coronavirus epidemic to repatriate, via their carriers, their nationals from Morocco. These countries include Algeria, France, Belgium and Germany.

The authorized flights to Morocco will be operated without passengers, and crewmembers will be required to stay on board the aircraft during stopovers.

Some Spanish tourists have been authorized to leave Morocco, after an exceptional opening of the land borders with the occupied Moroccan city of Sebta.

The decisions were made in consultation with the leaders of the concerned countries and come as part of Morocco’s preventive measures to avoid the spread of the coronavirus in the country, especially that all the persons who tested positive to the virus in Morocco came from abroad.

Actually, eight of the nine new cases reported Saturday are Moroccan expatriates living in Spain (4 cases), Italy (3 cases) and France (1 case), who arrived in Morocco between February 24 and March 12. The ninth case, a Moroccan woman, was infected by her husband who lives abroad.

The condition of all the patients is stable and not worrying, the Health Ministry said.

Meanwhile more cancellations or suspension of events are announced. In this connection, the Royal Moroccan Football Federation announced on Saturday the suspension of all football fixtures until further notice.

The decision was made after the Interior Ministry banned all public gatherings of more than 50 people.

However, the department of transport, underlined that all public transport services (train, bus, etc.) continue to be provided normally throughout the country.

In a release published on Saturday, the ministry urged public transport operators and professionals to take the necessary measures to ensure the transport of travelers and goods and to comply with the hygiene recommendations made by the Health Ministry.