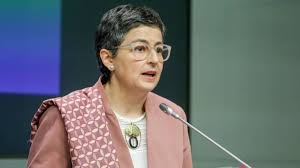 Sahara: Much to the distress of Algeria, Spanish FM reiterates centrality of UN-led process

Spanish Foreign Minister Arancha Gonzalez Laya reiterated her country’s unwavering position on the Sahara issue during her visit to Algeria on Wednesday March 4, much to the distress of Algerian rulers.

At a press conference in Algiers, the Spanish official, who was expecting questions on bilateral relations, was instead peppered with questions on Spain’s position on the regional conflict.

And her answers were clear: there is no change in Spain’s position on the Sahara. She said she already clarified the Spanish stance during her visit to Morocco on January 24.

Spain will always defend the exclusivity of the UN-led political process to find an agreed-upon and mutually acceptable solution to end the conflict.

Also in February, Mrs Arancha Gonzalez Laya Laya took to Twitter to reiterate that Spain does not recognize the self-proclaimed Sahrawi Republic (SADR) and that its stand on the Sahara remains unchanged because “it is a State policy”.

The Algerian government was so angered by the Spanish official’s remarks that it postponed the visit she was expected to pay to Algiers.

Spanish media El Pais quoted sources from the separatist Polisario as deploring the fact that the Spanish FM did not mention the word “self-determination” while she was speaking to the press in Algiers.

At the same news conference, Algerian Foreign Minister Sabir Boukadoum called for the respect of the UN but also of the African Union’s decision regarding the regional conflict.

He seemingly forgot that the AU made it clear in another statement in February during the 33rd Ordinary Session of the Heads of State and Government that it supports the exclusivity of the UN political process.

The Spanish official who was also asked by the Algerian media on Morocco’s territorial waters delimitation repeated what she already said during her visit to Rabat, namely that the North African Kingdom has the sovereign right to delimit its territorial waters and that she welcomed the Kingdom’s readiness to engage in dialogue to resolve any overlaps.