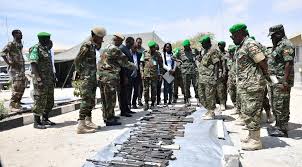 AMISOM hands over weapons captured from Al-Shabaab to Somalia

The African Union Mission in Somalia (AMISOM) said Saturday it had handed over to the Somali Federal Government weapons of war captured from Al-Shabaab terrorists.

The weapons, which included Rocket Propelled Grenade launchers, general-purpose machine guns, and assault rifles, were captured during joint operations by AMISOM and the Somali security forces.

The Head of AMISOM, Ambassador Francisco Madeira, symbolically handed over the weapons to Somali officials on Thursday in Mogadishu, Somalia.

The weapons of war handed over to Somali authorities are part of a large cache of small arms and light weapons.

“This is just a symbolic handover. We have got stores the Somali authorities will access, see and ship the weapons for safe storage,” Ambassador Madeira explained.

The AMISOM Force Commander Lt. Gen. Tigabu Yilma Wondimhunegn said AMISOM and Somali security forces were in the process of streamlining the procedure of handing over captured weapons.

“Recently, we had arms and ammunition recovered especially in Lower Shabelle, and the process for their hand over is ongoing,” added Lt. Gen. Tigabu.

The contingent commander of AMISOM’s Uganda forces, Brig Richard Otto, noted that the capture of weapons from Al-Shabaab is a tangible achievement from joint operations to degrade the terrorist group.

“Al-Shabaab remains a threat to the defenseless population, especially those who are in areas not controlled by AMISOM and the government security forces,” noted Brig. Otto.

Abdisaid Muse Ali, national security advisor to the President of Somalia, hailed the cooperation between AMISOM and Somali security forces, which has enabled success in operations against al-Shabab terrorists.

“Al-Shabab has evolved and the fight today is much more sophisticated through improvised explosive devices (IEDs), through instilling fear, through raising or broadening their extortion base,” Ali added.

The latest report by Armed Conflict, Location and Event Data indicates that Al-Shabaab has killed over 4,000 civilians in the last decade, with a majority being in Somalia.

Although the militants have been waging sporadic attacks, a recent report by the UN indicated that most of them have either surrendered or moved to urban areas due to frequent US airstrikes in remote villages of Somalia.

Further, the group is also fighting internal conflicts, which have seen many fighters quit. Most of those who surrender have been repatriated to the community, officials in Somalia said.