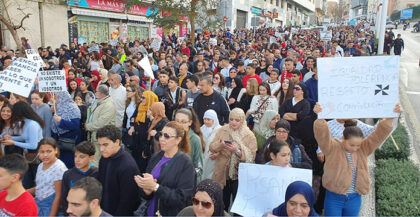 Thousands of Moroccans in the occupied city of Ceuta took to the streets to vent their anger at the discriminatory policies of the ruling Vox far right party.

The march, bringing together at least 6000 people, was described as the largest in the enclave in the 21st century signaling the frustration of the Moroccans in the city with the racism of the Spanish Vox party.

The protest started in Moroccan neighborhoods in the city where Muslims of Ceuta- as the Spanish media calls them- denounced their marginalization as they marched to the town hall.

They chanted slogans against racism, disparities and the indifference of the Spanish institutions and government towards their ordeal in the city.

They also demanded coexistence and mutual respect while warning of a return of fascism symbolized by the anti-Moroccan measures adopted by Vox and like-minded parties.

Although they fell short of calling for an end of Spanish occupation of the City, the protesters reasserted that despite their Spanish nationality they feel discriminated against.

Disparities are so stark in the city between affluent areas populated by Spaniards and poor neighborhoods where Moroccans live.

The protest also pointed at the economic hardships facing the city after Morocco’s decision to ban all sorts of low-scale smuggling, putting at risk economy and commercial activity in the city.