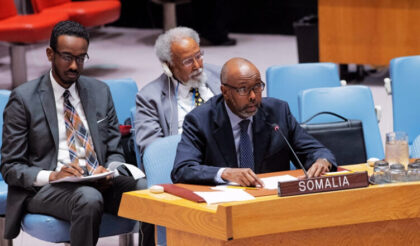 Kenya “violates the sovereignty and unity of Somalia”, Somali ambassador to the UN, Abukar Dahir Osman, told the UN Security Council on Thursday, warning that his country is ready to take “all necessary measures” to defend itself.

“Kenya continues to be a destabilizing force in Somalia,” he said at the end of a briefing by the Chair of the Somalia sanctions committee.

Kenya’s interference “undermines Somalia’s sovereignty, territorial integrity, political independence and unity,” insisted the diplomat, adding that “Kenya is encroaching on the border area of Somalia, which undermines our stability.”

“The government of Somalia strongly condemns these violations and will take all necessary measures to defend the unity and sovereignty” of the country, he concluded without further details.

Thursday’s briefing by the Chair of Somalia sanctions committee was the first briefing since the adoption of resolution 2498 on 15 November 2019, by which the Council consolidated and streamlined the provisions of the arms embargo, imposed an lED components ban, and renewed the mandate of the Panel of Experts on Somalia until 15 December 2020.