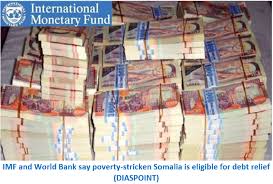 The International Monetary Fund (IMF) says it has secured more than $330m in debt relief for Somalia.

The African nation has about $5 billion in external debt, accounting for about 100% of its GDP, which the Fund has declared to be unsustainable.

The $330m brings the country a crucial step closer to receiving forgiveness for its debt.

The IMF said the funding pledged by its members showed that Somalia was committed to financial reform despite what it described as very challenging circumstances.

In December, the IMF has approved a financing plan that will help the IMF cover its share of debt relief for the country.

The financing plan includes cash grants from member countries and IMF internal resources. Those funds will be used to clear Somalia’s arrears to the IMF.

For several years now, the country, which is one of the world’s poorest has been under IMF-staff monitored programs that helped Somalia mobilize revenue and tracked financial records of the government.