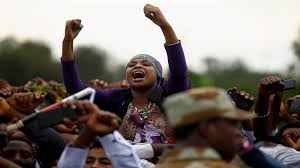 Ethiopia will release from jail 63 opposition activists and other high-ranking government critics by the end of the week, a spokesman for the attorney general’s office said on Tuesday.

The decision had been taken “for the national good” and investigations against them had been dropped, Zinabu Tubu was quoted as saying.

“The Ethiopian government hopes to widen the political and democratic space in the country with the freeing of these individuals,” he added.

Hundreds were arrested in the aftermath of the June violence in Ethiopia’s north that left five high-ranking officials dead and heaped pressure on a government struggling to cope with ethnic tensions.

Among the individuals being freed are members of the National Movement of Amhara (Nama), an ethno-nationalist group that the government blamed for the attacks.

Nama welcomed the announcement. It said its members should never have been detained.

Prime Minister Abiy Ahmed, who had been praised for loosening control in long-authoritarian Ethiopia, and was later awarded the Nobel Peace Prize, was accused at the time of using the violence as a pretext to jail critics.

New York-based Human Rights Watch said Abiy is yet to commit to investigating torture of detainees, the killing of protestors by security forces and other serious abuses.