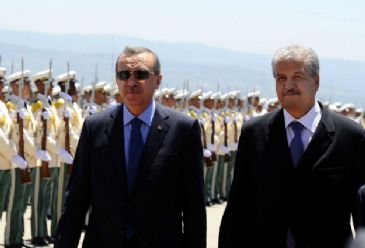 No More Entry Visas between Algeria,Turkey 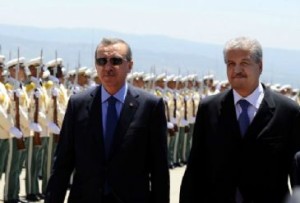 As a process of tightening the bilateral relationship between Turkey and North African countries, and more precisely the Maghreb region, the Turkish Prime Minister Recep Tayyip Erdoğan is currently on a visit from June 3rd to June 6th to Morocco, Algeria and Tunisia. Erdoğan plans to meet the heads of state or heads of government of these countries.
During his two day visit in Algeria to deepen Turkey-Algeria bilateral relations, the Turkish prime minister voiced out his desire to remove entry visas requirements between Algeria and Turkey. Speaking at a meeting to the members of the National People’s Congress in the Algerian Capital Algiers, the prime minister said “We have removed the entry visas with 70 countries, so why not with Algeria. Even though obtaining a Turkish visa is quite easy, removing out this procedure will go a long way facilitating their arrival in Turkey”.
The Algerian Prime minister Abdelmalek Sellal on his part hailed the long partnership of the two countries in different aspects and added that the visit of Erdoğan “demonstrates undeniably the quality of historical relations that bound Algeria and Turkey”. Furthermore he underlined his country’s commitment to tightening political, economic and cultural relations with Turkey.
“I can assure you that you will find in me and all Algerian politicians all availability and the desire to raise the dialogue and political dialogue as well as economic and cultural cooperation between the two countries,” Prime Minister Sellal said.
The Algerian prime minister also called on the Turkish investors to take advantage of the business opportunities and facilities offered by his country.