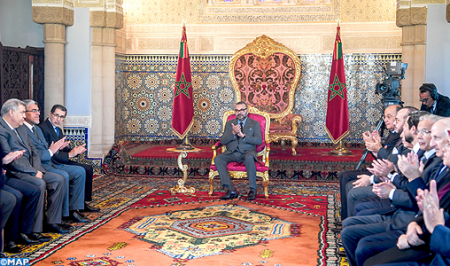 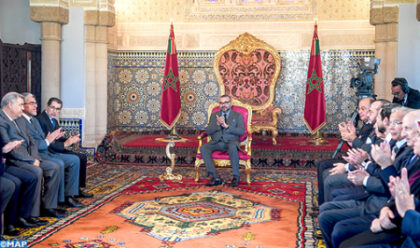 King Mohammed VI presided, on Monday at the Royal Palace in Rabat, over a ceremony on an integrated program destined to support and finance enterprises. The ceremony was also marked by the signing of three agreements related to the program.

King Mohammed VI is thus following up on the call he launched last October at the opening of the Fall parliamentary session, urging the banking and financial sector to be more involved in the country’s development process, mainly through simplifying and facilitating access to loans, being more open to self-employment projects and financing the creation of small and medium sized enterprises.

Speaking during the ceremony, Economy & Finance Minister Mohamed Benchaaboun said that following the Monarch’s call and in a bid to facilitate access to finance for businesses, the banking sector has elaborated an “Integrated Program to Support and Finance Enterprises”.

This program focuses on the funding of entrepreneurship, the coordination of support actions for entrepreneurship at the regional level and the financial inclusion of rural populations, outlined Mr. Benchaaboun, noting that this program includes several measures intended to overcome the difficulties that hinder access to finance for young project holders and very small and small enterprises.

Part of this program, the 2020 Appropriation Bill provided for the setting up of “the Fund to support entrepreneurship financing”. The $625 million fund (6 Billion DH), spanning over 3 years, is financed equally by the State and the banking sector, explained the minister.

The fund will mainly benefit young project holders, small and medium-sized enterprises to enable them to have access to financing, in addition to granting support to companies active in the export sector, added Mr. Benchaaboun, pointing out that the facility will also promote economic and professional integration of workers in the informal sector.

This initiative will help create annually about 27,000 new jobs and support 13,500 additional companies, affirmed the minister, saying that commissions will be set up at the regional level to coordinate and monitor the implementation of measures relating to entrepreneurial support.

The economy & finance ministry, in coordination with Morocco’s central Bank (Bank Al Maghrib) will follow up the implementation of this program, through the elaboration of periodic reports which will be submitted to the Sovereign, stressed Mr. Benchaaboun.

Taking the floor, Governor of Bank Al-Maghrib Abdelatif Jouahri said following the Royal Instructions laid down in the Royal Speech made during the opening of the autumn parliamentary session of 2019, the Central Bank adopted a set of measures including unlimited refinancing mechanism of all credits granted to the categories mentioned by the Sovereign in his speech.

This refinancing mechanism will also benefit the agricultural sector and projects carried out in rural areas, said Mr. Jouahri, noting that this mechanism is an addition to the special program set up in 2012 by Bank Al-Maghrib and relating to direct refinancing of bank loans granted to very small, small and medium-sized enterprises.

The central bank also decided to reduce equity capital requirements applied to banks with regard to the loans, added Mr. Jouahri, noting that the success of this program is the responsibility of all the stakeholders concerned, in particular the banking sector, public establishments and the beneficiary clients.

For his part, President of the GPBM Othman Benjelloun assured that the banking sector will contribute by up to $315 million, in equal shares with the Government and Bank Al Maghrib, to the financing of the “Fund of Entrepreneurship Financing Support”.

“Each of the Banks commits to provide young project holders and small and medium enterprises with all the support and time they need, in terms of proximity, assistance for structuring, training and consultancy, in all economic sectors and across the Kingdom”, he stressed.

The banks also pledge that their response times to entrepreneurs will not exceed three weeks, said Mr. Benjelloun, affirming that entrepreneurs will see their access widened to the various financial services in general thanks to technological tools such as Mobile Banking, as well as Microfinance and MicroAssurance.

Afterwards, the Monarch presided over the signing of three agreements relating to the implementation of the Integrated Program to Support and Finance Enterprises.