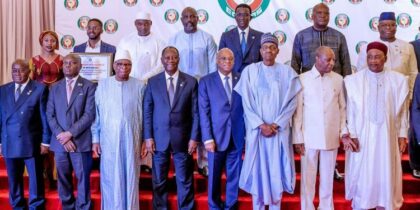 The Finance and Economy Ministers, as well as Governors of central banks of English-speaking West African countries on Thursday criticized a move to rename the CFA franc used by former French colonies, saying the move jarred with plans to introduce a region-wide currency of the same name.

In December, The Ivorian President Alassane Ouattara announced during a news conference with French President Emmanuel Macron that it has been agreed with France to rename its CFA franc “Eco” and cut some of the financial links with Paris that have underpinned the region’s common currency.

On Thursday, a communique issued after an extraordinary meeting of English-speaking West African countries in Abuja described President Ouattara’s pronouncement as a “unilateral” move, made without recourse to any relevant authority within the ECOWAS structure.

“The meeting noted with concern, the declaration by President Alassane Ouattara, Chairman of the Authority of Heads of State and Government of the West Africa Economic and Monetary Union (WAEMU) on December 21, 2019, to rename the CFA franc as ECO by 2020,” the group said.

The West Africa Monetary Zone (WAMZ) Convergence Council, which is to ensure that a number of macroeconomic criteria are met by member countries for the introduction of the ECO, said Ouattara’s pronouncement is not in line with Authority of Heads of State and Government of ECOWAS for the adoption of ECO as the name of an independent ECOWAS single currency.

Eight ECOWAS nations use the CFA franc but the bloc’s economy is dominated by Nigeria, and their monetary criteria — essential for a smooth transition to a single currency — are very divergent. The 15-nation bloc last year set the goal of creating a single currency, also named the Eco, in 2020.