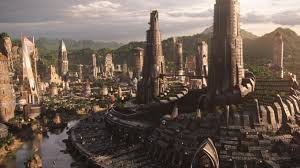 US hip-hop star Akon has finally signed the agreement for Akon City to be built in Senegal, the artist said in a tweet.

In 2018, the 42-year-old singer has announced plans to build a “real-life Wakanda” — a reference to the fictional land of Wakanda in Marvel’s Black Panther –, on the back of his almost-eponymous cryptocurrency, Akoin.

He told his fans that he had been gifted 2,000 acres of land by Senegalese authorities to start the project. Akon promised the city would be a “futuristic environment”.

Akoin – the musician’s cryptocurrency – will be at the center of the city’s “transactional life”, according to the Akoin website.

Under the “Akoin Ecosystem”, consumers will be able to buy, hold and spend cryptocurrency straight from their smartphones. Cryptocurrency is a digital or virtual currency that operates independently from a central bank.

While he was born in Missouri, Akon is of Senegalese descent and spent much of his childhood there.

In 2007 he co-founded the Konfidence Foundation, a health and education charity for underprivileged children in West Africa and the United States. He also co-founded the Akon Lighting Africa project in 2014, which Akon’s site says has brought solar power to 18 African countries so far.