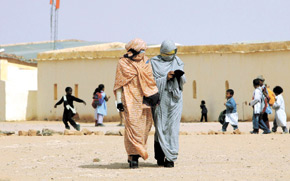 Few days after Spanish media recount the horrors suffered by a young lady who managed miraculously to escape to Barcelona after she was sold like a slave by her father to an older man in the Polisario-run Tindouf camps, Italian media turn the spotlight to the prevailing slavery practices in the camps that have been abandoned by Algeria to the mercy of a separatist militia.

Human Rights groups have repeatedly warned of the rampant slavery practices in the camp. Their calls are now echoed in Italian media agcnews.eu, which told the story of the 18-year old Sahraoui in Barcelona saying that she is not the only young lady sold for forced marriage to an older man.

The Italian media outlet deplored the lack of monitoring of human rights in the camps within the Algerian territory.

The website also shed light on other cases of torture and slavery such as that of Hija Maloma, 21, who was kidnapped within the camps in 2016 after paying a visit to her parents.

In 2009, two Australian journalists with the Sydney Morning Herald were invited to the camps by the Polisario representative in Australia with the aim to carry out a propaganda coverage in favor of the polisario leadership. While in the camps the two journalists noticed slavery practices and decided to secretly film a documentary on the ordeal of black people in the camps.

The film, dubbed “Stolen”, exposes modern-day slavery in the refugee camps of Tindouf through telling the story of a Sahrawi girl called Fatim Sellami, herself a slave, who was reunited with her mother after 35 years of separation with the help of the United Nations.

The film, which also tackles several cases other than Fatim’s, was not initially meant to deal with slavery. Ayala and Fallshaw wanted to make a documentary on the living conditions in the Tindouf camps, but when they arrived there, they found out about the slave trade and decided to shift focus.

The film shows that those Sahrawi girls offered for sale are persecuted and are frequently beaten. Their names are also changed and they are not allowed to marry except with the permission of their masters who have to provide them with a document stating that they have been granted freedom.

In its annual reports on the human rights conditions in the Tindouf camps, Human Rights Watch (HRW) has repeatedly condemned the persistence of slavery practices.

“Practices of slavery that centuries ago were a basic feature of traditional nomadic culture in the Western Sahara appear all but nonexistent among the Sahrawi refugees today,” HRW said.

“The persistence of certain forms of slavery highlights the need for continuous, on-the-ground human rights monitoring,” it said.