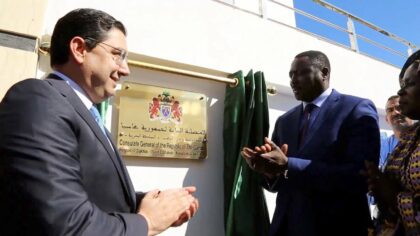 The Polisario has recently threatened to sap the UN-peace process through violating ceasefire in the Sahara. Morocco unrelenting on its sovereignty over all its historical territories has responded so far peacefully by showing the growing support for its territorial integrity especially among African countries.

Gambia, on the footsteps of Comoros, has taken its support for Morocco’s territorial integrity to a tangible level opening a consulate in Dakhla. A move that puts the Polisario to look at itself in a mirror reflecting an Algeria-backed militia lacking all attributes of a state.

The Gambian decision is also a slap in the Algerian face. The Algerian regime, as it seeks to divert attention from a diverting internal crisis typical of an illegitimate military regime, has openly expressed its disapproval of the Comoros decision to set up a consulate in the Sahara. Few days later, Gambia brings Algiers to terms with the reality of a growing awareness among African states of the unfeasibility of Algeria’s chimera of having a separatist state in Morocco’s south.

Opening consulates by African states in southern Morocco is also reflective of waning interest in the Algerian-funded Polisario within Africa.

It is true that Algerian oil-money earned the Polisario self-proclaimed republic a recognition in 1984, but the sands have shifted violently recently in favor of Morocco whose return to the African Union in late 2017 was preceded by a motion signed by 28 African states calling for a freeze of the separatist entity’s membership within the pan-African organization.

Ethiopia, Nigeria and Rwanda and other English speaking states in Africa have all refrained from backing the Polisario claims while supporting the UN efforts and UN Security Resolutions, which all stress primacy of Morocco’s autonomy initiative as a credible solution to the over-four decade conflict.

Thirty-seven countries from across Africa, making up two-third of the African Union members, do not recognize Polisario’s statehood.

Many African states deplore the membership of Polisario in the African Union as it represents an aberration that prejudged the outcome of negotiations in total disregard for the UN process and for Morocco’s historical rights as a country that was divided by two colonial powers.

However, the AU started remedying its past biases towards Morocco through decision 693, which states clearly that the Sahara should be tackled only within the UN framework barring the road to adversaries of Morocco’s territorial integrity within the African Union who sought to create a parallel mechanism.