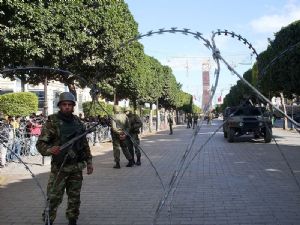 Tunisia: President extends state of emergency despite calls to end it

Tunisian President Kais Saied Monday extended the state of emergency in place since November 2015 despite recent calls by several groups to end it.

The President made the decision following consultations with outgoing Prime Minister Youssef Chahed and Speaker of the Parliament Rached Ghannouchi, a statement from his office said.

The new decision will come into force from January 1st 2020, the statement indicated.
The state of emergency has been in place since November 2015 following a terror attack on the presidential guard, the third in the same year.

Rights groups, trade unions and political parties last week called on the 64-year old leader to end the state of emergency and not use it to obstruct individual and public freedoms.

Kaied, himself a constitutional law expert, had taken a stand against the security measure which he described as a “breach on individual and public freedoms”, Ashaq al-Awasat reports.

“A set of objective conditions are required to announce the state of emergency, the most important of which is an imminent threat to the homeland’s entity and the normal functioning of the state institutions,” he was quoted by the Saudi daily as saying, before becoming President of the country.

Over 500 Tunisians, according to the country’s human rights observatory, have been under house arrest for various periods, either on suspicion of terrorism or corruption.