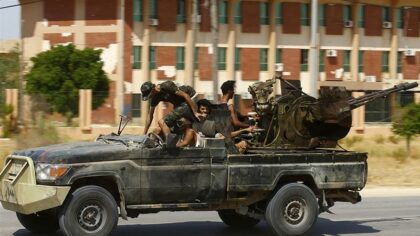 The government of Turkey has submitted a bill to parliament to allow it to deploy troops in Libya, as the conflict in the North African nation intensifies.

Turkish President Recep Tayyip Erdogan has announced readiness to send troops to Libya if requested by the country’s Government of National Accord (GNA).

The bill will be debated on Thursday, though it is not clear when the law will be voted on. It is however expected to be passed as Erdogan’s ruling party has enough support in parliament to have the motion approved.

Arab diplomats came together in Cairo on Tuesday for a closed-door meeting at the start of an extraordinary session to look into the latest situation in war-torn Libya, at Egypt’s request.

Iraq’s Permanent Representative at the Cairo-based Arab League Ahmad Al-Dulaimi restated his country’s opposition to foreign meddling in any Arab country, while backing dialogue and peace to overcome tensions.

Al-Dulaimi, who is the head of the current 152nd session of the league’s council, said in a statement distributed by his office that all political rivals in Libya should have “constructive national dialogue”.

He emphasized that Arab countries should throw much weight behind the bloc’s good offices aiming at restoring peace and stability in this war-torn North African country.

Relatedly, France and Egypt have called for the “greatest restraint” by Libyan and international authorities to avoid escalating the conflict in Libya, a statement from President Emmanuel Macron’s office has said.

France and Egypt called Monday for the “greatest restraint” by Libyan and international authorities to avoid escalating the conflict in Libya, a statement from President Emmanuel Macron’s office said.

The GNA is backed by the UN, but the addition of Turkish troops could further inflame tensions in a country torn by the devastating campaign of strongman Khalifa Haftar and his self-styled Libyan National Army.

The forces of the warlord have launched an assault on Tripoli early April in an attempt to capture the capital city. Since then, more than 140,000 Libyans have fled their homes.

The warlord Haftar is backed by Egypt, the United Arab Emirates and others, including what is believed to be a force of Russian mercenaries. The Tripoli-based GNA receives aid from Turkey, Qatar and Italy.

The GNA’s cabinet of ministers and Turkish legislators have since ratified the deal, but a separate motion is needed to send troops.

Libya has been in turmoil since 2011 when a NATO-backed uprising toppled longtime ruler Muammar Gaddafi.

Newer PostTunisia: President extends state of emergency despite calls to end it
Older PostAU: Egypt to hand over presidency to South Africa in February