2019 in Review: Diplomatic Setbacks for Polisario & Protests of Sequestered Sahrawis 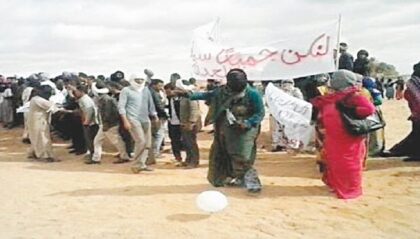 2019 will remain a year of bitter remembrance for the polisario leadership, which suffered a series of worldwide setbacks and was challenged by the sequestered Sahrawis that can no longer tolerate deteriorating living conditions, repression and corruption of the separatist leaders.

The secessionist group of Brahim Ghali and his Algerian & South-African supporters close up their worst year on record. They suffered a hammer blow when the Comoros Islands opened on Dec.18 a General Consulate in the city of Laayoune, a diplomatic move that confirms and recognizes Morocco’s sovereignty over its Sahara.

The Polisario and its mentor Algeria, which are both facing unprecedented popular uprisings and existential challenges, watched helplessly Rabat consolidating its stand, gaining more and more international support for its national cause.

All they could do is to sit down and slam the Comoro decision, knowing the worst is yet to come as they sense that all countries are expected to follow the footsteps of the Union of the Comoros at a time separatism showed its limits and global failure.

A few days before the bold Comorian decision, Jamaica’s foreign minister Mrs. Kamina Johnson Smith had reiterated the decision of her country to withdraw its recognition of the self-proclaimed so-called Sahrawi republic, SADR, a phantom entity, which is not recognized by the United Nations or any major capital in the world.

Today, most of the Caribbean countries have changed their stand on the issue of the Moroccan Sahara with 11 out of 14 of these countries having dropped their recognition of this entity. This clearly shows the eroding support of Polisario in this region.

Jamaica’s move came on the same day as Lesotho announced the suspension of all previous decisions and statements on the Sahara and the SADR, pending the outcome of the UN-led political process, dealing another blow to the polisario in its Southern Africa bastion where the separatists, who are armed, funded and sheltered by the Algerian regime, thought they were immune and will never be abandoned by their allies.

After his re-election as polisario’s chief with the blessing of the Algerian generals, Brahim Ghali and his lieutenants are now trapped. They will be held to account for their false promises amidst mounting social uproar demanding practical solutions and no more procrastination for the settlement of the Sahara issue, while Morocco is offering a credible, serious and realistic autonomy plan.