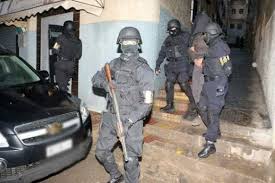 Moroccan security forces have arrested in two separate operations six supporters of the Islamic state group (ISIS) in Safi, near the city of Marrakech.

Three men, including a 20-year old who is member of the international terror group, were nabbed by Royal Gendarmerie forces in the first operation, conducted on the basis of intelligence provided by the National Security Directorate, DGST.

The trio were planning to join the ranks of the terror group.

The second operation carried out by the BCIJ, the kingdom’s powerful anti-terror force, led to the arrest of the three other people aged respectively 22, 22 and 52. They were rounded up in the district of Amouni.

The six individuals who had pledged allegiance to terrorist organizations will be charged for belonging to a terror cell.

The North African country has criminalized any terror activities including help provided to a terror act.

The BCIJ since its inception in 2015 has foiled hundreds of terror plots and dismantled a myriad of cells across the country.