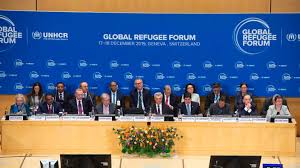 Morocco, a pioneer in international humanitarian action, reaffirmed Wednesday in Geneva its commitment to continue its contribution to collective efforts aimed at protecting and assisting refugees and helping people affected by war, violence and natural disasters and its willingness to further strengthen its partnership with the High Commission for Refugees (UNHCR).

This noble humanitarian action, driven by a spirit of sharing and international solidarity, as advocated by King Mohammed VI, is a pillar of Morocco’s foreign policy, said Minister in Charge of Moroccan Expatriates, Nezha El Ouafi, before the plenary session of the First Global Refugee Forum, held in Geneva.

She announced a financial contribution by Morocco as part of the implementation of the Global Compact on Refugees to support registration and documentation operations.

“As part of the sharing of the burden and responsibilities, and as co-sponsor of the Protection Capacity Theme, Morocco will contribute 300,000 dollars to support registration and documentation operations,” she said, adding that the UNHCR intends to launch in 2020 the biometric registration of 10 million people in 75 countries.

She noted that the First Global Refugee Forum provides the opportunity to exchange views on the actions to be implemented to ensure the international protection of refugees, whose registration is an essential prerequisite, a tool for guaranteeing their protection and an essential indicator for the evaluation of humanitarian aid intended for the populations concerned.

“Six people lose their lives every day while trying to cross from North Africa to Southern Europe and for every refugee who drowns, two others lose their lives in the Sahel-Sahara journey”, she deplored. “This situation challenges our collective conscience.”

The Global Compact on Refugees, adopted in December 2018 in Marrakech, must deliver on its promises and meet the legitimate expectations of those affected, El Ouafi pointed out.

Surveying Morocco’s national immigration and asylum policy, as spearheaded by the Monarch since 2013, the Moroccan official said this policy is marked by a global and humanist approach, in accordance with the constitutional fundamentals of the Kingdom and its international commitments.

The implementation of this strategy has enabled refugees and asylum seekers benefit from all the services offered to migrants in Morocco, including access to education, health care, vocational training and self-employment, the Moroccan official said, noting that Morocco is both a transit and home for many refugees and sub-Saharan migrants.

In this connection, the UN High Commissioner for Refugees, Filippo Grandi, pointed out Tuesday that asylum applications in Morocco have increased considerably over the past few years.

Commending cooperation between the UN refugee agency and Morocco, he said “we have worked very well with the Moroccan government on all aspects concerning these refugees; therefore cooperation has been very fruitful,” Grandi pointed out at a press conference on the sidelines of the First Global Refugee Forum.

In a message on International Migrants Day, celebrated on December 18, the UN Secretary-General Antonio Guterres called on world leaders to “give life” to the Global Compact for Safe Regular Migration adopted in Marrakech last year.

“All migrants have the right to equal protection of all their fundamental rights,” Guterres said in his message.

The Compact, adopted by leaders and representatives from 164 countries aims to better manage international migration, address its challenges, and strengthen migrants’ rights while contributing to sustainable development.