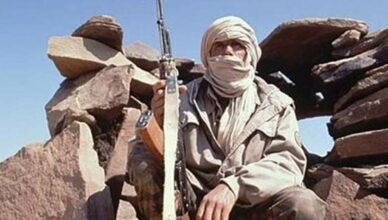 Imminent terrorist attacks in Tindouf, Algeria refuses to pull head out of sand

Algeria’s foreign ministry obstinately denied the veracity of the reports warning of imminent terrorist attacks and kidnappings in the Polisario-administered camps of Tindouf in southwestern Algeria.

Spain, Canada and the UN mission in the Sahara MINURSO have all warned of the unsafety of visiting Tindouf due to risks of terrorist attacks. The same area in Algeria’s southwest has been designated a no-go area by many other states including the UK and the US.

Yet, the Algerian foreign ministry continues to deny the reality of the terrorist threat in its south-west.

The MINURSO has asked the UN to open an investigation into such state lies after it received warning from Algerian officials on potential attacks and kidnappings for foreigners in Tindouf camps.

A MINURSO spokesperson told Spanish news agency EFE that precautionary measures have been taken by the blue helmets.

As Algeria’s stability dissolves under the intransigence of the military regime to meet street demands for democracy and civilian rule, Algeria’s south is becoming more than ever a safe-haven for terrorist organizations, some of whom entertain ties with Polisario officials.

In October, the US offered a reward of 5 million dollars to catch a former Polisario member and IS leader in the Sahel. This vindicates once more Morocco’s fears of Polisairo-run Tindouf camps becoming a target of recruitment by terrorist groups.

Adnan Abou Walid al-Sahraoui, who is wanted by the US authorities with a generous price tag is an ex-member of the Algeria-backed polisario separatist front and current chief of ISIS in Great Sahara (ISIS-GS) that killed four Green Berets in a 2017 ambush in Niger.

His case shows the threat posed by the perpetuation of the Sahara conflict as more and more disenchanted Sahraoui youth are increasingly recruited by terrorist and trafficking networks offering lucrative salaries.

Recently a group of US congressmen described the Polisario as a terrorist organization in light of its connivance with Iran and Hezbollah. Morocco severed ties with Iran against the backdrop of Hezbollah’s actions in the Tindouf camps where it offered training to Polisario militias.

The inter-connection between the Polisario and terrorist networks in the Sahel was no secret. The Separatist group had ties with the MUJAO (Movement for Unity and Jihad in West Africa) and Ansar Dine (a creation of the Algerian intelligence services/DRS) based in the city of Gao, in northern Mali.

Taking advantage of porous borders and Algeria’s failure to eliminate terrorism in its south, many terrorist groups lured Polisario youth to join their ranks notably after the chaos left by the fall of Libya’s Gadhafi.

In Libya in particular, where Polisario soldiers fought alongside Gadhafi after the 2011 revolution, the Sahraoui separatists could divert large quantities of weapons and resell them, via Mauritania, to terrorist groups swarming in the Sahel-Sahara region, according to an EU funded report by Project Safte.

“The availability and circulation of weapons on the black market in the region has proliferated significantly after the fall of the Kaddhafi regime and the conflicts that followed in that country,” notes Project Safte in 2018, adding that the Polisario Front has benefited from this situation and now has a “surplus of armaments”.

The Wall Street Journal published few months ago an article pointing out at the risk posed by the continuation of the Sahara conflict in “creating new opportunities for Islamic State or al Qaeda to expand.”

The Polisairo adopted terrorism as a tactic targeting civilians both Moroccan and Spanish in mining sites. These attacks took place following the Green March, which marked the end of Spain’s occupation of the Sahara provinces. The completion of the security berm thwarted the hit-and-run tactics peculiar to Polisario’s guerrilla warfare.