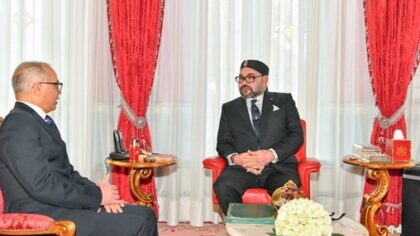 King Mohammed VI has appointed Thursday the members of the new ad-hoc committee for the development model set up recently.

The committee, chaired by Morocco’s ambassador to France Chakib Benmoussa, who was named to the position last Nov.19, is composed of 35 members with diverse academic and professional backgrounds. The members have in-depth knowledge of Moroccan society as well as of political, economic, social, cultural, and environmental issues, said the royal office in a statement.

The Commission mobilizes Moroccan skills working both in Morocco and abroad, and who are active and involved in the public, private or civil society sectors.

In accordance with the King’s guidelines, the Commission will set to work immediately to examine frankly, boldly and objectively the current situation in the light of the Kingdom’s achievements, the reforms undertaken, the expectations of citizens, the current international context and prospective developments, the statement added.

The committee is to submit to the Monarch, by next summer, a report on major changes needed and concrete initiatives for the new development model sought.
The committee members include outstanding public figures, such as former Prime Minister and current Chairman of the Court of Auditors, Driss Jettou; CEO of the Phosphate Group OCP Mostafa Terrab; writer & university professor Fouad Laroui; Chairman of the Economic, social and Environmental Council Ahmed Reda Chami, who is also a former Minister and a former ambassador; Hakima Himmich, professor of medicine and active militant in the health sector; Sociologist and University professor Mohamed Tozy. The Committee also musters economists, businessmen, and civil society activists.

The appointment of the chairman and members of the ad-hoc committee for the development model comes after the Throne Day Speech (29 August 2019) in which the monarch had announced the creation of the committee and outlined its missions.

The committee “will have to take into consideration the major reforms introduced – as well as those to come – in a number of sectors, such as education, health, agriculture, investment and taxation,” the Monarch had said, adding this advisory body is expected to make proposals and suggestions on how to improve these reforms and increase their effectiveness.

The committee is called to be totally impartial and objective, and to report on facts as they are on the ground, however harsh or painful they may be, the King had said.

In a recent meeting with the media, Chakib Benmoussa said the committee will submit its report by June 2020, noting that the experts will work “on a voluntary basis.” When the committee presents its report, within six to seven months, i.e. by the end of June 2020, it will be dissolved, unless its mandate is extended by the King, he explained.

The committee’s report will outline a ten-year outlook on structural transformations regarding primarily social and human issues (education, health, transportation, mechanisms of redistribution of wealth, economic growth), he said. The report will also address the major topical issues that concern the whole world, such as demographic and societal developments, topics relating to youth, the impact of the digital revolution, climate change or the rise of protectionism in the world.