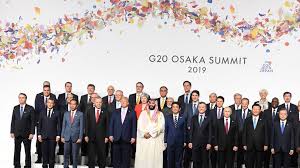 Saudi Arabia Sunday announced it has taken leadership of the Group of Twenty or G20, until the meeting of its leaders in the kingdom next year in November.

The Gulf country takes over from Japan and becomes the first Arab country to assume the presidency of the powerful organization encompassing leaders of developed and developing countries.

As president of the organization, Saudi Arabia will host over 100 events and conferences in the lead-up to the November 21-22 conference of leaders in Riyadh in 2020.

The G20 is a leading forum for international economic cooperation and accounts for around 80 percent of the world’s economic output, two-thirds of global population and three-quarters of international trade.

Crown Prince Mohamed bin Salam who is driving the kingdom’s economic growth congratulated Japan for leading the organization and vowed that his country will promote consensus.