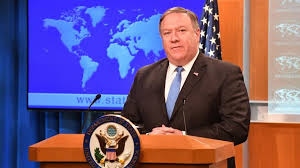 US Secretary of State Mike Pompeo announced Tuesday in Washington that he will pay a visit to Morocco early December.

Mike Pompeo who made the announcement at a news briefing at the State Department described Morocco as “one of the strongest partners” of the United States in the region.

The US Secretary of State said that his visit to Morocco will take place after the coming NATO Summit scheduled for December 3-4 in London, where he will be part of US President Donald Trump’s party.

In the joint statement released at the end of the 4th session of the US-Morocco strategic dialogue held in October, Mike Pompeo highlighted King Mohammed VI’s leadership in advancing a bold and far-reaching reform agenda over the two past decades.

He expressed appreciation for the Monarch’s continuous and valuable support on issues of common interest such as peace in the Middle East, Africa’s stability and development, as well as regional security.

Pompeo also thanked Morocco, which he described as “a stable security exporting partner” for its ongoing leadership of the Global Counterterrorism Forum and for its sustaining role in the Global Coalition to Defeat ISIS.