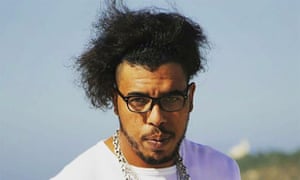 Moroccan rapper Mohamed Mounir, known as Gnawi, was sentenced to one year in jail on the charge of insulting the Police institution in a live video on instagram on October 24.

Gnawi confessed before a court in Sale to his wrongdoings saying he was under the impact of alcohol when he was stopped by the police in Rabat before making a live on instagram insulting policemen and their families.

Offending public servants or institutions is punishable by up to two years in jail in Moroccan law.

Police lawyer said he offended by his statements the police institution and said that Gnawi should also be sued under the penal code for insulting god in his live on instagram as well.

Gnawi, a native of Sale, usually sings about social problems including poverty and social injustice. He recently released together with two rappers from Fez a song deemed irreverent to the country’s symbols.

No case was brought against the two other rappers who are enjoying their freedom, which further discredits the attempts by those who want to surf on the tide of opportunism by framing Gnawi’s case as a freedom of expression issue.

Expressing dissent in Morocco or frustration over economic and social problems has never been about insulting national symbols and institutions.