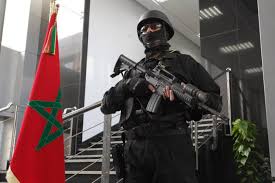 Morocco’s FBI, the central Bureau of judicial investigations (BCIJ), arrested an extremist, suspected of supporting ISIS ideology, in Salé, Rabat’s twin-city, this Tuesday, who was preparing to carry out a suicide attack.

Preliminary investigations showed that the 33-year old suspect knows how to manufacture explosives and was promoting and glorifying the extremist ideology of ISIS through apps and social networks, the counterterrorism bureau said in a statement.

Investigations also revealed that the suspect was encouraging terrorist acts in the name of this terror group according to the “Lone Wolves” method of operation, the BCIJ statement said, adding that the individual had released recordings explaining the methods of making explosives and explosive belts.

The suspect, who was preparing to carry out a suicide attack in the Kingdom, was in contact with ISIS media leaders and their supporters abroad.

The counter-terrorism bureau staff seized several electronic devices, mobile phones, and knives during the operation. The security unit put the suspect in custody for further investigation.
The operation is part of Morocco’s efforts to combat ISIS fighters and terrorist groups.

Morocco’s BCIJ has conducted several similar operations throughout the year. The latest was on November 17, when the BCIJ arrested two ISIS-linked suspects in Rabat, who were plotting terror attacks across Morocco.