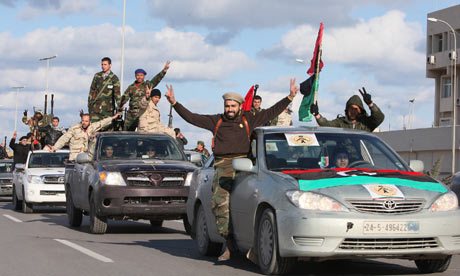 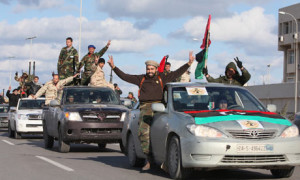 After having satisfied the demand of the militias to adopt a law, which forbids authorities of the Gadhafi era from taking part in the political and administrative activities, militias still remain adamant to lift their blockade on the foreign and justice ministries. They are now asking for Prime Minister Zeidan’s departure from office.
According to Osama Kubbar, the adoption of the law is but one of their two demands. Their second one is for the Prime Minister to leave office said Osama. He is the deputy head of an umbrella group created at the end of 2011, which includes several former rebel groups. He claimed that indirect negotiations will soon begin with officials close to the Prime Minister. Osama Kubbar tried to become prime minister, but failed to secure enough parliamentary votes for a nomination.
The armed protesters are claiming that they have been demonstrating peacefully for a couple of months, but the government didn’t pay heed to their demands. Osama described it as a sign of disrespect and provocation which led to the use of arms. “I hold them responsible; this is the only language they understand,” he said. The government claimed that it doesn’t want to repel the protesters with force because it will lead to more chaos, as the country continues to undergo a turbulent democratic transition jeopardized by the countless amounts of weapons on the streets.
The demand for departure of Zeidan could lead to bloodshed and an eventual civil war because he has the backing of several regional militias willing to defend him in power. At the beginning of the week, a member of parliament from the General National Congress Party said that plans are underway to oust the government from power by withdrawing the parliament’s confidence.