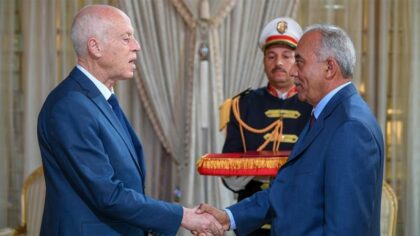 According to Jemli, the cabinet members will be chosen on “their competence and integrity, regardless of their political affiliation”.

The next government will have to work with President Saied, a constitutional lawmaker with no political experience or party affiliation.

During his inauguration last month, Saied said that “there will be no tolerance in wasting any cent of the money of our people” as Tunisia struggles against joblessness and a flagging economy, the same toxic ingredients that triggered the uprising. Its key tourism sector is only recently rebounding following 2015 terrorist attacks.

Kais Saied also pledged to tackle the roots of extremism, saying, “we must stand united against terrorism.”

Ennahda came in first in last month’s legislative election, but took only 52 of 217 seats in a deeply fragmented parliament.

The Ennahdha party leader Rached Ghannouchi was elected parliament speaker after he secured 123 votes of the 217 votes cast in parliament, following an agreement with the liberal Qalb Tounes party headed by controversial businessman Nabil Karoui.

Karoui, who was defeated in the second round of October’s presidential election, posed as a bulwark against Islamism during his campaign. His party had previously vehemently ruled out any agreement with Ennahdha.

Ghannouchi, 78, has led Ennahdha since it was founded almost 40 years ago, carrying the movement to victory in a 2011 election, just months after the party resurfaced from underground following the revolution that ousted autocrat Zine El Abidine Ben Ali.