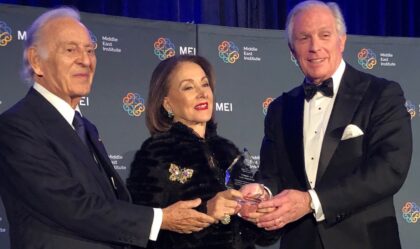 Othman Benjelloun and his wife Leila Mezian Benjelloun, co-chairs of the BMCE Bank Foundation, were granted the “Visionary Award” bestowed by the Washington-based Middle East Institute to individuals or organizations in recognition for their outstanding work in the region.

Othman Benjelloun, founder of the BMCE Bank Foundation, and his wife, Leila Mezian Benjelloun, President of the Foundation, received the prestigious Visionary Award at the research center’s signature event of the year, the Awards Gala, held Tuesday, Nov. 12, in Washington.

The Visionary Award recognizes an individual or organization for outstanding and forward-thinking work that promotes peace and stability in the Middle East and North Africa region.

The Benjellouns have been recognized for their work at the head of the BMCE Bank Foundation, set up in 1995. For nearly 30 years, the Foundation has been fighting illiteracy, poverty, and discrimination in rural villages across Morocco. Together, they have created and financed more than 100 rural community schools throughout Morocco. The foundation is also very active in the preservation of the environment and in the field of teaching Amazigh language and culture.

The Medersat.com program, supported by the BMCE Bank Foundation, has been able to enroll more than 29,000 students since its launch in 2000, 50% of them girls, through 309 preschool units and schools, 6 of which are in sub-Saharan Africa (Djibouti, Republic of Congo, Mali, Rwanda and Senegal).

Schools are equipped with modern infrastructures and resources, incorporating the latest state-of-the-art technologies. The diversity of cultures is at the heart of the strategy, which includes in the schools syllabi the teaching of Arabic, Amazigh, French and Mandarin. The program now has nearly 1,800 graduates from Medersat.com schools since the 1st class and employs nearly 800 teachers, 63% of whom are women.

Founded in 1946, the Middle East Institute is the oldest Washington-based institution dedicated solely to the study of the Middle East. It is a non-partisan think tank providing expert policy analysis, educational and professional development services, and a hub for engaging with the region’s arts and culture.

Its mission also consists in increasing knowledge of the Middle East among citizens of the United States and in promoting a better understanding between the people of these two areas.