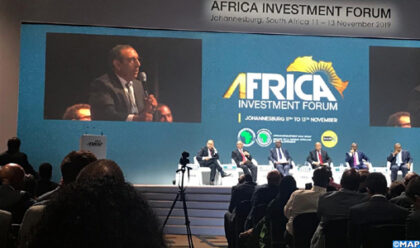 A strong Moroccan delegation is taking part in the second edition of the Africa Investment Forum, or the African Davos as it is called, to present to African and international investors the assets of Morocco, and also to expound the key role it plays in the promotion of the continent’s development.

On the opening day of this African Davos Monday, the members of the Moroccan delegation held a series of meetings with officials from several African countries, representatives of funding agencies and large public and private companies as well as delegates of sovereign wealth, investment and pension funds, to highlight the attractiveness of the kingdom.

The delegation members surveyed before their various interlocutors the strong points of Morocco attractiveness, including its political stability, its highly strategic geographical position as a platform of entry par excellence in the African continent, its vast infrastructure projects as well as the key sectors where the Kingdom has confirmed its competitiveness, including renewable energy and financial products.

Morocco’s contribution, as a key player on the continental scene, to Africa’s development efforts was also raised during the Moroccan delegation’s talks with African partners, who trust a continental leader that has promoted South-South cooperation as a key part of its foreign policy.

The Moroccan Success Stories in several African countries were mentioned during these meetings.

The Moroccan delegation to the AIF-2019 is composed, among others, of representatives of the Moroccan Solar Energy Agency (MASEN), the Office Chérifien des Phosphates (OCP), the Attijariwafa bank group, Ithmar Capital, the Confédération Générale des Enterprises du Maroc (CGEM), Casablanca Finance City (CFC), Diana Holding and the Moroccan Agency for the Development of Export Investments (AMDIE) as well as the Ministry of Foreign Affairs and African Cooperation held a series of meetings to highlight the attractiveness of the kingdom.

AMDIE organized Tuesday on the sidelines of IAF-2019 the forum “Invest In Morocco – Johannesburg Round”, a reference economic event targeting leading investors of the continent.

The high-level business forum, the second after the similar event held in Kigali, Rwanda last April, was chaired by Morocco’s ambassador to Pretoria, Youssef Amrani, who made a presentation, before over 150 businessmen and institutional decision-makers, on the investment opportunities offered by the Moroccan market to major economic players on the continent.

The members of the Moroccan delegation to the AIF participated in the event.

The forum provided a platform for South African investors and groups operating in Morocco to share their experience.

“Invest In Morocco – Johannesburg Round” is an innovative approach to promote foreign investment in Morocco, and display the attractiveness of the Kingdom as a destination for intra-African investments, explains AMDIE.

This event also seeks to implement the Moroccan King’s vision based on the development of balanced and mutually beneficial relations with sub-Saharan partners, the agency says, adding that a series of similar forums are planned in different strategic markets of the continent.

The Africa Investment Forum is an innovative, multi-stakeholder transactional marketplace conceived by the African Development Bank, aimed at raising capital, advancing projects to the bankable stage, and accelerating financial closure of deals.

The inaugural Africa Investment Forum , also held in Johannesburg, secured investment interests for deals valued at $38.7 billion in less than 72 hours. “A lot of progress has been made on these investment interests,” with a highly dedicated team of partners working around the clock to accelerate financial closure for transactions,” African Development Bank President Akinwuni Adesina said during the opening session of the AIF 2019.