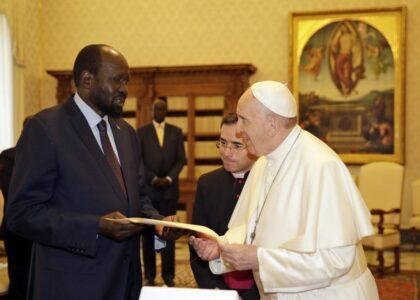 Pope Francis has announced that he will be visiting South Sudan next year, where efforts are underway to salvage a peace deal.

In 2017, Pope Francis scheduled a trip to the war-torn nation but had to cancel it because of political instability and poor security.

“I want to renew my invitation to all sides in the national political process to seek what unites and overcome what divides, in a spirit of true brotherhood,” Pope Francis said.

Last April, a month before the original deadline, the pope brought South Sudanese President Salva Kiir, opposition leader Riek Machar and other politicians to the Vatican for a retreat.

Under the terms of a peace agreement signed in September 2018, the vice presidents were to take office together in the spring, sharing power and ending the armed conflict between clans and among communities.

The formation of the government was delayed until Nov. 12, but just five days before the deadline, Kiir and Machar announced a further delay until February.

There are fears the breakdown of the deal could lead to the return of large-scale violence in the predominantly Christian country.

An estimated 382,000 people are believed to have died in the years of fighting following South Sudan’s 2013 descent into civil war.