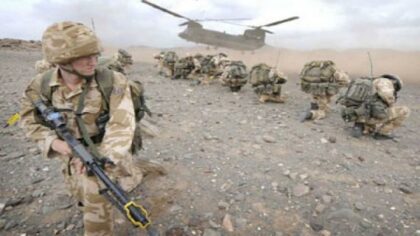 The Royal Gibraltar Regiment is currently conducting Exercise in Jebel Sahara near Marrakesh to hone their combat and engagement skills.

The UK ministry of defense described the exercise as “a great opportunity to learn and exchange ideas in a very testing environment. Train hard, fight easy,” according to Gibraltar Chronicle.

“Always a pleasure to visit our soldiers in the field especially on Ex Jebel Sahara in Morocco with which both Col John and myself have such close affinity in setting up and nurturing. Next year will mark the 20th anniversary of the first Jebel Sahara exercise,” Colonel Brancato who is taking part in the drills said in a tweet.

The Royal Gibraltar Regiment has been conducting annual military drills with the Royal Armed Forces since 2000. These exercises offer the Gibraltar army a wider area for training than what is obviously available in Gibraltar.

By the past, military exercises between Gibraltar and Morocco have raised the suspicion of Spain, which claims the British rock.

Gibraltar, the self-governing British overseas territory, is yet again in the middle of a tussle with Spain in the wake of the Brexit vote.

Since it fell to the British in 1704, the Rock has always been of utmost importance for the UK’s military and commercial interests in the Mediterranean.