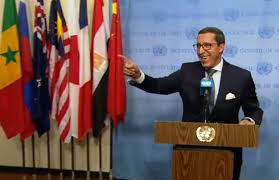 The UN Economic and Social Council (ECOSOC) re-elected Morocco’s Permanent Representative to the United Nations, Omar Hilale, Vice-President of the Council and President of its humanitarian segment for the 2020 cycle.

This re-election for a second consecutive term, a first in the annals of ECOSOC, is an illustration of the credibility and trust enjoyed by Morocco, particularly among the African Group, which has appointed the Moroccan diplomat to this position.

The renewal of Hilale’s term for another year at the helm of the ECOSOC Humanitarian Segment also represents a consecration and recognition of the achievements made by Morocco during the 2019 cycle.

After his re-election, Omar Hilale expressed gratitude to the African Group for this renewed confidence in Morocco.

He pledged to continue the many structural reforms initiated to strengthen ECOSOC and its humanitarian segment, reinforce its impact on the ground, and streamline and highlight its work, in order to respond to the needs of millions of people in situations of crisis around the world.