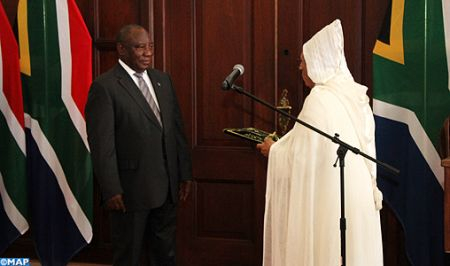 Morocco’s ambassador to Pretoria hands his credentials to President Ramaphosa 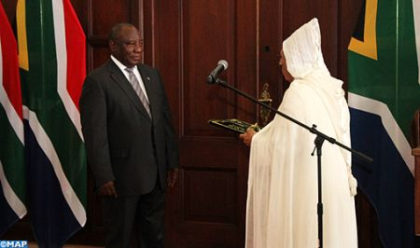 Youssef Amrani Tuesday handed to South Africa’s President Cyril Ramaphosa his credentials as Morocco’s extraordinary and plenipotentiary ambassador to Pretoria in a move that many analysts expect would break the ice between the two African heavyweight nations.

This is a “watershed” in relations between the two countries, Amrani told the press after meeting President Ramaphosa.

Morocco and South Africa have for more than a decade given each other the cold shoulder on the backdrop of Pretoria’s support for separatists in the Sahara.

“In line with Royal guidelines I will work tirelessly in close cooperation with South African authorities to give substance to the renewed ambition of our two countries to put bilateral relations on a track of fruitful momentum,” said Amrani.

The goal, he said, is to build a rich partnership between two states that have a shared history of supporting Africa’s liberation movement, including during the fight against apartheid.

Strong ties between Rabat and Pretoria would give a much needed push to Africa’s development, he said.

In this respect, Amrani called for reinforcing political dialogue and economic cooperation between the two countries as well as paying a particular attention to cooperation in the social, human and cultural areas.

Morocco and South Africa are the largest African investors in their continent, Amrani recalled, adding that both countries are called upon to join efforts to boost south-south exchange in Africa.

Pretoria and Rabat are committed to achieving the 2063 agenda of the African Union and have brought their input to launching the continental free trade area that will bring together African countries in a single market of 1.2 billion people.

The Moroccan King had sent a letter to Ramaphosa following his election in May saying “we look forward, in the kingdom of Morocco, to opening a new chapter of fruitful cooperation based on constructive dialogue and mutual esteem – one that would reflect the time-honored bonds between our peoples and help us serve their interests and promote unity and progress in our African Continent.”

The two countries decided to upgrade their bilateral ties to ambassadorial level following a meeting between King Mohammed VI and former president Jacob Zuma in Abidjan on the sidelines of the EU-AU summit in November 2017.