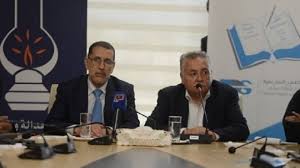 The Moroccan former communist party, the Party of Progress and Socialism (PPS), has decided to withdraw from the governmental coalition led by the Islamist Party of Justice and Development (PJD, on the eve of an expected cabinet reshuffle.

The decision was unanimously taken by the political bureau at a meeting on Tuesday and will be submitted for endorsement to a special session of the party’s central committee on Friday, says the party in a statement issued Tuesday evening.

The party, headed by former Minister of Housing and Urbanism Nabil Benabdellah, justifies this withdrawal by the fact that “the current government is the hostage of a logic devoid of any real political sense enabling it to handle the decisive phase in the life of the country”.

The coalition government is made up of six political parties. Besides the PJD of Saad Eddine El Othmani and the PPS, the RNI of Aziz Akhannounch, the USFP, the Constitutional Union (UC) and the Popular Movement are part of the government.

“This majority is also subject to all kinds of unacceptable conflicts and political practices, in the absence of the required minimum of cohesion or harmony,” added the PPS in its statement.

The PPS has accused the political parties of the coalition of thinking about ministerial positions and electoral wins more than thinking about reforms.

The political parties are now lost in the electoral race of 2021, instead of focusing on the current challenges, sacrificing the time separating us from this deadline, the PPS said, arguing that this is behind “the disappointment of large sections of our society.”

A member of the political bureau told some local media, on condition of anonymity, that the PPS was victim of political struggles and paid a high price.

The PPS which had 5 ministerial portfolios in the first PJD-led government, has been amputated to end up with two portfolios, the member said, adding the situation does not reflect the party’s value or weight on the national political scene.

For the political bureau member, the situation does not bode well for the future of the coalition government, nor for the party that leads (the PJD), on this eve of the ministerial reshuffle requested by the highest authority of the country.

Actually, on July 29, King Mohammed VI called on the head of government to conduct a reshuffle.

“I ask the Head of Government to submit to me, after the summer break, proposals to fill executive posts in the Government and the civil service with high-level national elites chosen on merit and competence,” the King said in the Throne Day speech.

The reshuffle seeks to “inject new blood in the government,” the King added.

El Othmani pledged to present a shortlist of the new cabinet after his return from New York, where he represented Morocco at the 74th General Assembly of the United Nations.

According to le360 news outlet, well-informed sources said the PPS was the biggest loser in the current discussions to form the new government team.

In the 25-member cabinet to be proposed by Saad-Eddine El Othmani, the PPS would have had only one portfolio. The straw that broke the camel’s back is the sidelining of Anas Doukkali the current Minister of Health, the sources told le360.