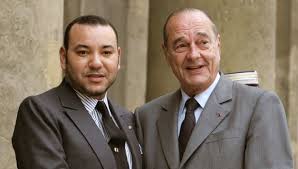 King Mohammed VI has sent a message of condolences to President Emmanuel Macron of France following the passing away this Thursday (sept.26) of Jacques Chirac that he described as a great friend who actively contributed to the strengthening of the relations of friendship between Morocco and France, and an architect of the unique partnership binding the two countries.

“The Kingdom of Morocco will cherish the memory of a great friend who actively contributed to the strengthening of the relations of friendship between our two countries by establishing an exceptional partnership. This unique partnership is the reference of our cooperation”, said the Sovereign.

In his message, the Monarch hailed “the memory of a great statesman who dedicated his life to politics with determination, nobility and a constant concern for the well-being of his fellow citizens”.

The passing of President Chirac affects not only France, which he served with fervor, but also the entire international community, which saw in him a man of dialogue and conviction, deeply attached to the respect of international law and justice in the world, said King Mohammed VI.

The Monarch also expressed his sorrow at the death of Jacques Chirac in a message to his spouse Bernadette Chirac, wherein he offered her as well as to Claude and other members of his family, on his behalf and on behalf of the Royal Family, his heartfelt condolences and deep compassion.

“President Chirac was a warm and modest man who was always attached to Morocco. His visits to the Kingdom and his admiration for it are the testimony of a long-standing and solid friendship,” said the Sovereign.

“I have memories of our meetings and, in particular, the kindness he always showed. He worked tirelessly to deepen the excellent relations that unite our two countries,” he said, adding that “France has lost a prominent statesman who had marked history by his decisive action and courageous positions in favor of peace. He has built a special relationship of closeness with all fellow French citizens”.