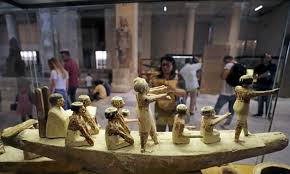 Egypt’s attorney general Tuesday ordered the arrest and trial in absentia of a former Italian diplomat who is believed to have been involved in the smuggling out of 21,855 archeological artifacts, which had been returned to the Arab country.

In a statement from his office, Nabil Ahmed Sadek demanded the arrest of honorary consul in Luxor, Cav. Ladislav Otakar Skakal, and his placement on “Red Notice” by INTERPOL for his connection with the theft of 21,855 antiquities and their smuggling out from Egypt to Italy.

The statement indicated that the archeological objects were smuggled out in 2017 from Alexandria to the Italian Salerno port, in diplomatic containers supposedly containing household goods.

Italian authorities seized the objects and informed their Egyptian counterparts. Investigations ordered by Egyptian prosecution led to the arrest of several people including Medhat Michel Girgis Salib, owner of the shipping company, as well as Raouf Boutros Ghali, a brother of former Minister of Finance, Youssef Botros Ghali who served under deposed leader President Hosni Mubarak from 2004 to 2011, reports say.

Search of Skakal’s residence in Cairo led to the seizure of other artifacts belonging to Egyptian civilization.

The former Italian diplomat is no longer in the Arab country and his whereabouts in Italy remain unknown.

Italy returned the stolen objects, which were displayed in an exhibition last year in a Cairo museum.