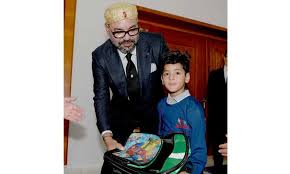 King Mohammed VI has given utmost priority to overhauling the county’s educational and vocational training systems to offer promising prospects for the Moroccan youth.

As part of his interest in developing the country’s educational system, the King kick-started the 2019-2020 academic year Thursday at a ceremony in a Rabat neighborhood where an assessment of the education and vocational training offer in the kingdom was presented to him.

In his recent speeches the King has stressed on the need for the government to improve public education and training to equip the Moroccan youth with the tools to access the job market and contribute to the country’s development.

On the occasion of the launch of this academic year, the King visited the workshops of the training Centre for hotel and tourism professions, built in partnership with the Mohammed V Foundation for Solidarity and inaugurated by the Sovereign on 15 July 2014.

Minister in charge of education and vocational training Said Amzazi, presented to the King a report on the assessment and latest developments of his department reform which he said is on the right course, particularly in terms of offering education for all, especially in hard to reach areas.

In this regard, Amzazi highlighted the progress made in the field of generalizing early education, noting that the national average of children enrolled in pre-school education for 2018-2019 was 55.8%, and that this rate was achieved thanks to the enrolment of 100,672 additional children and the creation of 5,833 new classes.

He said the rate is set to reach 67% in 2021, with a generalization of pre-school education for children aged 4 and 5 by 2027 and an integration of the category of 3-year-olds from 2028 onwards.

The Minister also pointed at Tayssir program under which financial assistance is offered to families in need to help their children’s schooling.

He also mentioned the increase by the government in the number of beneficiaries of the medical assistance program dubbed Rameed, which was offered to 1,800,000 students for the school year 2018-2019 compared with 706,359 for the year 2017-2018.

Speaking on the same occasion, Director General of the Office for Vocational Training and Labor Promotion (OFPPT) Loubna Tricha gave a presentation on the progress of the Cities of Trades and Skills Program (CMC), the backbone of the new roadmap for the development of the vocational training sector, presented to the Sovereign on April 4.

This program aims to inaugurate a new generation of vocational training institutions, promote the employability of young people, boost the competitiveness of businesses, and lead the change towards a homogeneous and more efficient national vocational training system, said Tricha.

It provides for setting up 12 Cities of Trades and Skills, one for each region of the Kingdom, which will offer a capacity of 34,000 academic places with an accommodation rate of 16%, she said, noting that eight units will be attached to these cities, notably the 2 Institutes of Training in the health professions of Rabat and Casablanca, the 5 “agriculture” poles of the eastern region, and the regions of Souss-Massa, Fez-Meknes, Beni Mellal-Khénifra and Rabat-Salé-Kenitra, in addition to the tourism institute under construction in Dakhla.

The OFPPT general director assured that the concept of the cities of trades and skills relies on three fundamental pillars, namely modern pedagogical areas, an updated engineering training, and an enhanced human capital.

Tricha underscored, on this occasion, that the national target offer will encompass 11 sectors, offering 449 training branches, including 29% newly created and 24% updated ones.

Regarding the progress of the implementation of this program, Tricha asserted that the search of land plots started once the new roadmap was validated, adding that the cities will be delivered in three groups, between school year 2021 and 2023.

The 3 regions: Souss Massa, Lâayoune Sakia El Hamra and the eastern region will open their cities from the beginning of the year 2021, she said, noting that, by the year 2022, 5 new cities will be set up at the level of Rabat-Salé-Kenitra, Tangier-Tétouan-El Hoceima, Beni-Mellal-Khenifra, Draa-Tafilalet and Guelmim-Oued Noun.

The start of the school year 2023 will be marked by the completion of the program, with the opening of the CMCs of Casablanca-Settat, Fez-Meknes, Marrakech-Safi and Dakhla-Oued Dahab, she concluded.

On the same day, the Sovereign launched the Royal Initiative “One Million Schoolbags”, which benefits this year more than 4,463,000 pupils and mobilizes an amount of 484 million dirhams. Launched by the Sovereign in 2008 and renewed every year, this initiative benefits primary and secondary students, with a priority given to the rural world (63%).

The King handed, symbolically, schoolbags and textbooks to ten students from the Othmane Ibn Affane school and Sidi Yahya Zaer secondary school, both in the Skhirate-Temara prefecture.