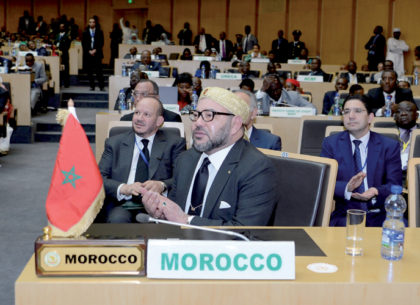 Moroccan foreign policy under the leadership of King Mohammed VI reflects the achievements made at home in the fields of infrastructure, energy as well as strengthening the rule of law and democracy bringing Morocco ever close to its traditional allies and to its new friends and partners.

King Mohammed VI put Morocco on the path of supporting global peace efforts and multilateralism contributing to the country’s credibility and international reputation.

The King paid visits to global powers including the US, China and Russia as it aspires to diversify its partnerships while building with traditional partners in the EU especially France and Spain, Morocco’s top trading partners.

Since 2008, Morocco has earned an advanced status with the EU with whom trade and political ties kept growing and survived attempts by Algerian-backed separatist to undermine them.

The Polisario and its mentor Algeria have launched desperate maneuvers aiming at undermining Morocco’s relations with the EU as well as the Kingdom’s sovereignty over its southern provinces by using the economic card.

But the separatist front keeps suffering defeats with the US earlier this year adopting an appropriation bill that stipulates explicitly that the assistance funds allocated to Morocco will also benefit the Sahara.

This US move came after the EU parliament approved the fisheries deal on Feb. 12 and before that, on Jan.16, the agricultural agreement, which both cover the Sahara.

The Polisairo’s challenge to these agreements was considered by the EU top court as invalid as the separatist entity, headquartered in the authoritarian Algerian state, is not eligible to plea or claim to represent the population in the Sahara who have their own legitimate elected bodies.

The latest decisions by the USA and the EU stress Morocco’s pre-eminence as sole interlocutor in negotiating international agreements covering the Sahara, a fact that is boosted by the reality on the ground.

The return to the African Union in late 2017 was a watershed that further underscored Africa’s support for Morocco’s territorial integrity and sovereignty over the Sahara.

In Latin America, Morocco has stepped up its diplomatic efforts, winning the support of countries that were until recently supporters of the Algerian-funded separatists’ thesis in the Sahara.

Over the last years, support for the Algerian-sponsored separatist thesis in the Moroccan Sahara has been waning as at least 43 countries have withdrawn their recognition of the SADR entity out of 80 that previously recognized it in a Cold War context.

Furthermore, as relic of the cold-war, the Polisario remains obedient and dependent financially and diplomatically on its paymaster, Algeria, which uses it to achieve regional hegemony to the detriment of regional stability.

Morocco, under the leadership of King Mohammed VI, has been at the forefront of international efforts to address common challenges notably those relating to peace and security, climate change and migration.

This was clearly expressed through Morocco’s efforts to create conditions favorable for international consensus by hosting and initiating landmark conferences such as the UN Climate Summit COP22 in 2016 and the migration summit in Marrakech in December 2018.

In the same vein, Morocco’s Chairmanship of the Global Counter Terrorism Forum which aims at enhancing international cooperation in the fight against terrorism and extremism is a step in the direction of joining global forces against calamities that threaten international peace and stability.

The North African country has given example by contributing to UN peace keeping missions with more than 60,000 soldiers taking part in 17 UN operations across the globe.

Special attention is also attached by Morocco under the leadership of King Mohammed VI to Africa and south-south cooperation through win-win partnerships addressing the African continent’s pressing needs notably in terms of food security, agricultural development, migration and training.