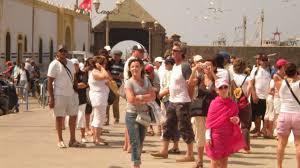 More than 5.4 million tourists visited Morocco in the first semester of 2019, a 6.6 pc increase compared to the same period last year, according to data released by the Tourism Observatory.

The Italians top the list of inbound foreign tourists, representing 12 pc of the overall travelers who visited the North African country during that period. The French ranked second, representing 9 pc followed by the Spaniards (8 pc), the Germans (8 pc), the Dutch (7 pc), the Belgians (6 pc) and the Britons (6 pc).

The cities of Marrakech and Agadir remain the most popular destinations, attracting during the first semester 58 pc of the overall foreign visitors. Marrakesh maintained its first spot, followed by Agadir, Tangier and Fez.

The sector of tourism employs in Morocco 2.5 million people. It accounts for 7 pc of the country’s national GDP. The North African Kingdom is among the major popular tourist destinations in the region.

The country is progressing steadily towards the goal of becoming one of the world’s 20 largest tourist markets. To achieve this goal, Morocco has worked out an ambitious strategy aimed at doubling the size of the sector, boosting its annual revenues, opening up new flight routes, launching promotional initiatives and diversifying source markets.