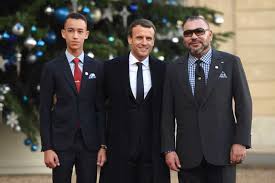 The exceptional Moroccan-French partnership has been strengthened further under the reign of King Mohammed VI, said French President Emmanuel Macron in a congratulation message sent to the Moroccan Sovereign on the occasion of the 20th anniversary of his enthronement.

President Macron expressed hope that the partnership between the two countries will continue to flourish for years to come, affirming that France stands by Morocco’s side and supports its projects.

“France also hails Your Majesty’s mobilization to fight climate change, promote regional peace & security and address the sensitive issue of migration,” added the French President, commending the Sovereign’s commitment to multilingualism, which allows the Moroccan and French peoples to forge a unique and exceptional proximity.

“Since 1999, under Your Majesty’s Leadership, Morocco has witnessed major transformations. Important reforms have been made to ensure a harmonious, inclusive and sustainable development in the Kingdom, particularly for the benefit of its youth,” stressed Mr. Macron in his message.