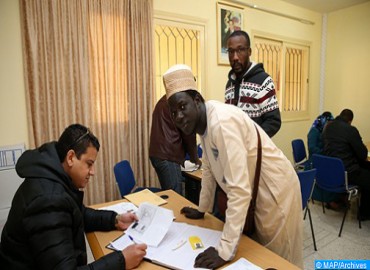 In his quality as leader in charge of preparing the African Agenda on Migration, King Mohammed VI led efforts at the African level in favor of a human-based approach to migration that goes beyond narrow calculations building on the success of a migrants legalization policy at home that won prize internationally.

Thanks to its forward-looking migration policy at home combined with a series of steps to foster ties with the countries of the continent, Morocco has bolstered its soft power in Africa while advocating a paradigm shift that looks at migration from a win-win perspective.

Since King Mohammed VI urged the government to adopt a new migration policy, Morocco has become a “destination of choice” for several Sub-Saharan migrants.

The national immigration and asylum strategy, adopted in 2014, was adopted in line with Morocco’s human rights commitment and in accordance with a holistic approach that seeks to guarantee access to migrants to basic rights and services including, education, social housing, employment.

The legalization campaign benefited more than 50,096 migrants, mostly from Sub-Saharan Africa and Syria.

Morocco’s efforts are targeting the improvement of the living conditions of migrants, especially the most vulnerable social categories such as children. Thanks to this solidarity based immigration policy, 6424 children of immigrant families are now enrolled in Moroccan schools, a step that is conducive to their social integration.

Morocco has also taken steadfast action against criminal networks operating in human trafficking thanks to a pro-active security approach against smugglers as evidenced by the significant drop in arrivals to Spain this year.

The domestic success of Morocco’s approach towards immigration was echoed in the Kingdom’s advocacy of a collective management of immigration that goes beyond narrow calculations and stereotypes.

In the same message, the King said that he will submit proposals to the African heads of state at the next AU summit in order to chart a real African Agenda on migration.

As part of its international advocacy for a new approach towards migration, Morocco took the co-presidency with Germany of the Global Forum on Migration and Development, which held its 11th meeting in Marrakech in December 2018 and adopted the Global Compact for safe, orderly and regular migration.

King Mohammed VI submitted in January 2018 the “African Agenda on Migration,” a non-binding document permeated by a co-development approach and containing ideas, proposals and thoughts shared by official institutions, civil society organizations and researchers from Africa to address migration challenges.

The agenda highlighted the need to harness the economic and social benefits of migration in the continent and advocated “an approach based on national policies, sub-regional coordination, a continental vision and international partnership.”

AU’s peace and security council adopted one of the Agenda’s key recommendations, i.e. the setting up of an African Migration Observatory with the tasks to understand, anticipate and act.

The setting up of the African Migration Observatory, to be headquartered in Rabat, was proposed by King Mohammed VI.

“The African Agenda has dedicated a fully-fledged institution to migratory dynamics, the African Observatory for Migration and Development, which will have its headquarters in the Kingdom of Morocco and which is explicitly mentioned in the Compact,” King Mohammed VI said in his message to the UN migration conference in Marrakech last year.

International organizations commended Morocco for its migration policy. In a flagship report, United Nations Conference on Trade and Development (UNCTAD) said “the experience of Morocco features prominently…and provides insights for many countries to learn from.”

“Addressing the challenge of migration requires an innovative approach that allows for assessing causes, impact, and identifying solutions, particularly by building synergies between development and migration policies. We must work together to develop an African agenda on the topic that would articulate a common vision of ways and means of dealing with the question of migration within our continent and in international forums,” the report quoted King Mohammed VI of Morocco as saying.

On a visit to Morocco in March this year, Pope Francis said Morocco “will continue to be an example of humanity for migrants and refugees within the international community, so that here, as elsewhere, they can find generous welcome and protection, a better life and a dignified integration into society.” The Pontiff sovereign made the remarks in a speech on his first day of the visit in the Hassan mosque esplanade in front of some 10,000 people from across Morocco.

The Pope praised Morocco for its advocacy of international cooperation to promote migrants’ rights, recalling that last December the Kingdom hosted the UN Intergovernmental Conference on the Global Compact for safe, orderly and regular migration, which adopted a document intended to serve as a point of reference for the entire international community.