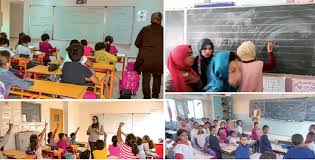 The Moroccan parliament passed a law by overwhelming majority that offers the broad-lines for the reform of the education system including controversial provisions such as the promotion of French as a language of teaching scientific subjects.

The adoption of the law came after months of disagreements mainly over the language of teaching sciences between the ruling Islamist PJD party and the opposition Istiqlal party on the one hand and other parties on the other hand.

The law was finally passed by 241 votes in favor, 4 against and 21 abstentions.

In addition to two hardline proponents of arabization in the PJD party, two leftist FGD MPs opposed the law which failed to include their amendments to impose a tax on wealth and a progressive inheritance tax to improve public education.

Education Minister Said Amzazi described the adoption of the law as a “watershed’ that would put the reform on a sustainable path.
Amzazi said that ideological considerations should be put aside while discussing a framework law on education providing for the promotion of foreign languages.

The law showed cracks within the PJD’s edifice after a member of the political bureau Driss El Yazami resigned as leader of the party’s parliamentary group, a decision taken moments after his colleague, former Secretary General and PM Abdelilah Benkirane instigated against the law for its support of the use of French as a language of teaching.

Critics considered the stands of some proponents of the Arabization of public school as a form of hypocrisy as most send their own children to be privately educated in French, including Benkirane.