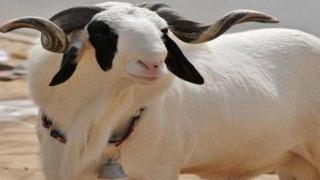 Mauritania to supply Senegal with nearly 300,000 rams for Eid al-Adha

Mauritania will supply Senegal with close to 300,000 rams for Eid al-Adha feast next month, Senegal’s minister of livestock said.

Samba NDiobena Ka said the supply will make up for the shortage of rams for the religious celebration next month.

Senegal will need for this year’s sacrifice festival 810,251 beasts including 260,000 for capital Dakar, Ka added.

The situation contrasts with last year. Over 60,000 rams were unsold in 2018 and the blame was put on the former livestock minister Aminata Mbengue Ndiaye for allowing import of livestock from Mali and Mauritania.

For the 2019 celebration, Senegal and Mauritania agreed to cooperate on several levels including trade, health and administrative procedures to facilitate the celebration in both countries.

The two countries were recently embroiled in a maritime dispute after Nouakchott imposed ban on Senegalese fishermen, in its interior waters.