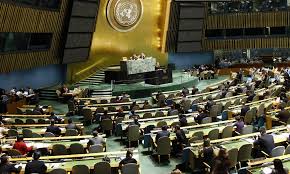 Several representatives from Morocco’s southern provinces and advocates of human rights took the floor at the 19th session of the UN Committee of 24, convening in New York, to highlight the major social and economic development accomplished in the Moroccan Sahara, which has become a model of inclusive development and growth, and to renew support to the Kingdom’s territorial integrity.

The petitioners also denounced the continued abuse and oppression suffered by the Sahrawis sequestered in the Tindouf camps by the Polisario militias that are armed, sheltered and funded by the Algerian military regime.

Addressing the UN special Committee as a legitimate representative of the Moroccan Sahara, Mr. Abba Mhamed, vice-president of the Laayoune Sakia El Hamra region, said the region has been undergoing significant socioeconomic changes, noting that such transformation gives the local people a chance to administer their own affairs.

In this context, he noted, the region of Laayoune Sakia Al Hamra was the first to enforce advanced regionalization through the implementation of a new model of regional development providing the population with the appropriate means and framework to administer their own affairs and fully realize their potential to promote the region.

The region attracts decent investment in health and education under the 2016-2021 development program, he added, emphasizing that the Sahara population benefits from their own resources.

For her part, vice-president of the Dakhla-Oued Eddahab region, Ghalla Bahiya, said her participation in C-24 proceedings represents the proactive nature of that region’s women and youth.

She said 700 projects in the region are spurring new momentum for growth, adding that socioeconomic progress is giving the region greater autonomy. Progress is irreversible, she stressed.

Touria Hmyene of the Association for the Freedom of Women Sequestered in the Tindouf Camps said the camp population are victims of oppression due to cruel and inhumane measures imposed by Polisario thugs.

Many have called into question the responsibility of the host country, she said, adding that women have led campaigns to protest against restrictions on the freedom of movement.

Khalid Bendriss of the Association for the Support of the Moroccan Autonomy Initiative said Morocco’s proposal, presented to the United Nations in April 2007, is a real opportunity for resuming negotiations with a view to achieving a final solution to the dispute.

The petitioner, who emphasized that autonomy is the only viable solution under the Morocco-proposed plan, warned that other options would entail the risk of the region’s instability while prolonging the plight of those in the Tindouf camps.

Zoubida Souad Kriska of the Organization for Ending Human Rights Violations in the Tindouf Camps said it is high time the international community recognized the ongoing human rights abuses in the Tindouf camps, which are under the military control of Polisario armed group.

Among other horrors, many women are sexually abused and, if pregnant, face torture in maternity detention centers, she said, requesting that the Special Committee ask the Secretary-General to look into the situation in the camps, and that the international community holds Polisario responsible for its crimes and rights violations.

Several participating countries in the 19th session of the UN Committee of 24 have voiced support to Morocco’s territorial integrity and to the Autonomy Initiative as a means to achieve a lasting solution to the Sahara issue.

In this vein, the delegates of Gulf countries, including Saudi Arabia and the united Arab Emirates, of African and of Caribbean countries have spoken out in favor of the Moroccan autonomy initiative, repeatedly described by the UN Security Council and world powers as serious and credible.

The delegates expressed support for the political process under the exclusive aegis of the United Nations Secretary-General to achieve a consensual and mutually accepted political solution to the regional dispute, while commending Morocco’s commitment in this regard.

In his address before the Committee, Morocco’s permanent representative to the UN, Omar Hilale, made it clear that a political solution to the dispute, under the exclusive aegis of the United Nations, can and will only be designed within the framework of Morocco’s sovereignty, territorial integrity and national unity on the basis of the Moroccan autonomy Initiative.

The Moroccan diplomat affirmed that the Sahara issue is a question of the completion of Morocco’s territorial integrity and not of decolonization and that the Security Council is considering the issue as a regional dispute inherited from the Cold War.

North Africa Post's news desk is composed of journalists and editors, who are constantly working to provide new and accurate stories to NAP readers.
NEWER POSTMorocco’s Managem expands stake to 85% in a gold project in Guinea Conakry
OLDER POSTLibya: Libyan National Parties Back Haftar at a Cairo Conference