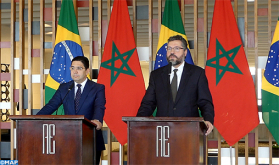 Brazil backs the serious efforts made by Morocco to achieve a “realistic” solution to the Sahara issue, said on Thursday Brazilian Foreign Minister, Ernesto Araujo.

Speaking in Brasilia at a joint press conference with Moroccan peer Nasser Bourita, Mr. Araújo said his country is willing to contribute to the various efforts aimed at finding a realistic solution to this regional conflict and go beyond rhetoric.

He also hailed the relations of friendship and trust binding the two countries which share a diplomatic vision based on action, clarity and common values, describing Morocco as one of Brazil’s main partners in the Arab world.

For his part, Mr. Bourita said that the strengthening of cooperation with Brazil is part of the royal vision insisting on the diversification of Morocco’s international partnerships, saying the visit paid by King Mohammed VI to this country in 2004 gave a new impetus to relations between the two countries.

The Moroccan top diplomat stressed the need to bolster further the economic and trade cooperation ties between Rabat and Brasilia which have huge growth potentials.

The two ministers reviewed latest developments on the regional and international scenes, welcomed the momentum of the Moroccan-Brazilian cooperation and pledged to work together to enhance further bilateral relations in all sectors including agriculture, food security, logistics transports and IT.

They highlighted the convergence of views between the two countries on transnational challenges, such as organized crime, terrorism and illegal migration.

During his visit to Brasilia, part of a Latin American tour, Mr.Bourita conferred with several senior officials of this country and signed agreements on investment, legal cooperation and defense.

On the sidelines of Bourita’s visit, an exhibition entitled “Brazil-Morocco: More Than Centenary Friendship” was inaugurated Thursday.

The exhibition highlights the historical ties between the two countries through several themes, namely “diplomatic relations in the 19th century “,” The migration of Moroccan Jews to Brazil”, “Diplomatic, cultural and economic relations since the 1960s” and “Artistic creation as a vehicle for bilateral relations”.

The exhibition revisits decades of rich shared history, woven by human flows and a precious cultural heritage through a selection of photos, archives’ documents and manuscripts.